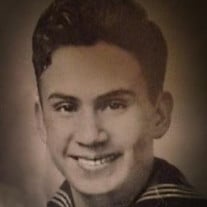 Frank Munoz Gutiérrez died on July 17, 2020 at the young age of 94 years old. He was preceded in death by his beloved wife of 69 years, Mary R. Gutierrez, and is survived by his daughters Kris Gutierrez (Berkeley, CA), Vicky Cail (N. Hollywood, CA), son James Gutierrez (Globe, Arizona), his brother Pete Gutierrez , grandchildren Summer Gutierrez, Scott Perkins, Reanna Gutierrez, Danielle Monette, Xavier Cail, Vanessa Gutierrez, Julia Ward, Sarah Salcido, James Dean Gutierrez, and Autumn Gutierrez. His great grandchildren Andereya, Akira, Kaiden, Logan, Arabellla, Zara, Nevaeh, Julian, Josiah, Jayla, Jayvan, Jacob, Jesse, and Ryley brought joy to his life, as did his many loving nephews and nieces, Marlene Burke, Keith, Jerry, Tom, Gloria, and Bobby Gutierrez, Patricia Artiago, Mary (Pippers) Mack, Ben, Frankie, Jonelle, Joe, Jason, and Ernie Rocha, Lillian Gomez, Ena Aavlik, Pris Avalos, Jr., Yvonne Avalos, and Cindy Hernandez. Frank Gutierrez’s life story—by his own telling and by many who knew him—is highlighted by the union, partnership, and loving relationship he shared with his wife, Mary. Dad always commented that his two greatest accomplishments and sources of pride included marrying Mom and serving in WWII. Theirs was a formidable partnership and they were inseparable in all they did, from traveling, attending ASU and Diamondback’s games, supporting their children and grandchildren’s sporting events, and going on trips with their dear and longtime friends. Aviation Ordinance Man First Class Gutierrez participated in both theatres during the war as a member of Squadron VC8 that included both fighter and torpedo planes. His was the first squadron to fly at night. Dad’s role was that of an aerial gunner on a TBF torpedo bombers and then on the TBM torpedo bombers. Gutierrez was on the Guadalcanal escort aircraft carrier that was part of the decorated U.S. Navy Task Force 22.3 with its additional 4 destroyer escorts: USS Pillsbury, USS Jenks, USS Chatelain, and the USS Pope. Dad received an Air Medal for his participation in the Battle of Okinawa and a Presidential Unit Citation for the capture of U-505 German U-boat off the coast of West Africa on June 4, 1944. Although the Task Force captured the U-69 and 515, it was cited for its capture of the 505, code books, and the enigma machine. This became a top-secret mission for the entire Task Force in which the Guadalcanal and subsequently other carriers secretly towed the prized submarine to Bermuda where it remained in secrecy until the end of the war, so that the Germans would not know that the Allied Forces had broken the code. This was the US Navy's first capture of an enemy warship at sea since the War of 1812. Dad especially enjoyed sharing his WWII experience with students, particularly the capture of U-505,and was a well-received speaker in his grandchildren and great-grandchildren’s classrooms. He was a strong supporter of public education, higher education, and veterans’ affairs and was active in the Miami chapter of the Veterans of Foreign Wars where he served as Post 1441 Commander and subsequently State Commander. Gutierrez worked in the Miami area copper mines for 35 years in a range of positions, including shift superintendent until he retired in 1988. Dad resided in Miami, Arizona until he and Mom retired to Payson, subsequently moving to Mesa for the remainder of their lives. Dad remained an avid sports fan, particularly of the ASU Women’s Basketball team and still attended home games. At age 94 he was still driving, went to the library every day, and always made sure to walk an hour a day. Until the end, he was a remarkable storyteller, listener, and communicator, whose sociality connected him with people, young and old. The WWII cap he donned every day made him a conversation magnet. Dad was buried with military honors at the National Memorial Cemetery of Arizona on July 24, 2020. He will be forever known for his kind, genuine, and generous spirit, his tremendous wit, and his love of people and life.

Frank Munoz Gutiérrez died on July 17, 2020 at the young age of 94 years old. He was preceded in death by his beloved wife of 69 years, Mary R. Gutierrez, and is survived by his daughters Kris Gutierrez (Berkeley, CA), Vicky Cail (N. Hollywood,... View Obituary & Service Information

The family of Frank Munoz Gutierrez created this Life Tributes page to make it easy to share your memories.

Send flowers to the Gutierrez family.