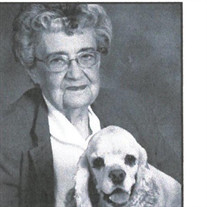 Frances Hunt Percival Williams, 95, of Mesa, AZ, died Feb 19, 2022. She passed peacefully at home surrounded by her daughter, son, and daughter-in-law. She was born on Jan 24, 1927, to Dorothy Hunt Percival and William Frank Percival in Mt Vernon, NY. Fran attended Arizona State University where she met the love of her life, John Arthur Williams. They were married on March 27, 1947, and they had 2 children, Katherine Anne Thisted and John Arthur Williams II. After her children were in college and high school, she went back to school at ASU where she worked very hard to earn her master’s degree in Special Education. She was an avid outdoors woman who loved her sports. As a teenager she raised Scottie dogs and worked with horses after her family moved from New York to Tucson, AZ. Over the years she enjoyed skiing, hiking, fishing, and camping. She was a big supporter of the Arizona Diamondbacks and she and her son, John had season tickets together for many years until COVID-19 interfered. Most of all she loved her family and having opportunities to spend with not only her children but her grandchildren, great-grandchildren, and extended family, both time at home and while traveling. Throughout her life, she worked as a Primary school teacher and a Special Ed teacher and retired from Cartwright School District. After retirement, she continued to Substitute teach throughout the Valley and even did private Tutoring. She also got very involved in Genealogy and many Ancestral organizations. She was a member of Daughters of the American Revolution, Mayflower Society, The Ancient and Honorable Artillery Company of Massachusetts, Dames of the Magna Charta, and Order of the Eastern Star. Fran is survived by her daughter, Katherine Thisted, son, John A. Williams, II, son-in-law, Blair, daughter-in-law, Annette, granddaughters Eric Romaine, and Jennifer Blomquist (husband, Scott), grandson, John A. Williams, III, great-grandchildren, Hazel Williams, Nicholas Blomquist, Caitlin Blomquist, John A. Williams, IV and John A. Williams, V, brother, Bill Percival and sister, Margo Percival. She was preceded in death by her husband, John A. Williams, parents, Dorothy Hunt Percival and William Frank Percival and brother, Charles Hinsdale Percival. Funeral services will be February 25th at 10:00 a.m. at Desert Heritage Church in Mesa with the Pastor Derrick Elliot officiating. She will be placed in the VA Cemetery in Phoenix, AZ with her husband John by the family only. Memorials or donations may be made to Desert Heritage Church.

Frances Hunt Percival Williams, 95, of Mesa, AZ, died Feb 19, 2022. She passed peacefully at home surrounded by her daughter, son, and daughter-in-law. She was born on Jan 24, 1927, to Dorothy Hunt Percival and William Frank Percival in Mt... View Obituary & Service Information

The family of Frances Hunt Percival Williams created this Life Tributes page to make it easy to share your memories.

Send flowers to the Williams family.