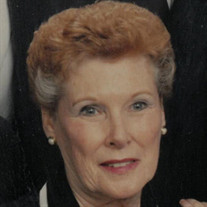 Frances M. Burrell, 95, of Mesa, Arizona passed away peacefully on November 8, 2021 at her home. She was preceded in death by her husband, Lamar Burrell, who passed in 2005. Frances was born June 13, 1926 in Belzoni, Mississippi to Sammie L. Dorris and Mary L. Johnson; she was an only child. She attended country schools in Kilmichael, Mississippi, and later in life completed some college classes at Mesa Community College in Arizona. As the war was winding down, Frances was married on November 11, 1945 to William Lamar Burrell whom she met while working at Camp Van Dorn in Mississippi. Their honeymoon was spent driving across the country where she would meet her new in-laws along with the large Burrell family in Safford, Arizona. Frances is survived by her daughter, Doris B. Martin of Cave Creek, Arizona and her son, Kent L. Burrell and daughter-in-law Cherie Burrell of Gilbert, Arizona. She also leaves behind grandchildren Daniel Burrell (Roger Apitz) of Mesa, Joshua Burrell (Tamra Pearce Burrell) of Mesa, Lacey Burrell of Durango, Colorado, and Stephanie (Parker) Schmitz of Rexburg, Idaho. Also surviving are cherished great-grandchildren Macyn, Makson and Kendyl Burrell of Mesa. The family thanks her care-giver of the last several years, Carrie Merrill (and daughters Jennelle and Carlie) for their love and devotion. Frances worked at various part-time jobs while living in Safford, but after moving to Mesa in 1958 she took time to settle the family into a new home. Eventually she went to work at West Junior High (now Carson) as an aide to the librarian. This job morphed into a full-blown audio-visual department with Frances at the helm. She enjoyed working with the equipment and the 9th grade students who learned how to operate the different film projectors. She also formed wonderful friendships with many of the administrators, teachers and staff during her 24 years there. Frances always enjoyed having time in the summer to paint bedrooms, scour floors and windows, and have extra time for trips back home to Mississippi. It also meant the family could spend time at Canyon Lake or Lake Powell waterskiing and camping out. She retired after the first grandchild was born to add baby-sitting to her list of favorite things. Baking was always a high priority for her, and she enjoyed sharing her recipes with anyone who asked. Her blackberry jam from her own vines was legendary! A family service will be held on Wednesday, November 24, 2021 at the National Memorial Cemetery of Arizona in Phoenix. Donations in her name to any animal shelter would be appreciated.

Frances M. Burrell, 95, of Mesa, Arizona passed away peacefully on November 8, 2021 at her home. She was preceded in death by her husband, Lamar Burrell, who passed in 2005. Frances was born June 13, 1926 in Belzoni, Mississippi to Sammie L.... View Obituary & Service Information

The family of Frances Marie Burrell created this Life Tributes page to make it easy to share your memories.

Send flowers to the Burrell family.