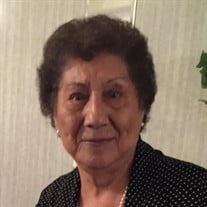 Our precious mother, Esther Duenas Valenzuela, went to heaven on September 21, 2021 surrounded by the love of her three children. She died at the age of 96, just of 21 days shy of her 97th birthday. Esther Valenzuela was born October 12, 1924 in Glendale, Arizona to Fernando and Soledad Duenas. Her father, Fernando, died shortly after her birth and her mother, Soledad, a widow with children, later wed Jose Arriaga; the only father Esther ever knew. Esther was preceded in death by her parents: Fernando Duenas, Jose Arriaga Sr. and Soledad Arriaga, brothers: Patricio Duenas, Elias Duenas and Blas Arriaga, and her infant granddaughter Merissa Valenzuela. Esther now joins Jose, her loving and devoted husband of 50 years, in heaven. Jose, a dapper young man, and Esther never noticed each other until young adulthood even though Esther had been friends with his sisters for years. They married in June of 1945. Esther, was one of eleven children, and is survived by her siblings: Margarita Sanchez, Vera Olivas (Danny), Joe Arriaga (Fran), Dolores Tigue, Nellie Reyna (Richard), Teri Sargent (Harry), and Felix Arriaga ( Nadine). In addition she leaves behind three children; Barbara Sutphin, Joseph Valenzuela, and Fernando Valenzuela (Lisa), five grandchildren: Patrick Sutphin M.D, (Yoshie), Stephanie Valenzuela, Jason Valenzuela, Michael Valenzuela (Amber), and Nickolas Valenzuela (Lupe), and seven great-grandchildren: Emilio, Akane, and Lucia Sutphin, Cayden, and Ayame Valenzuela, William and Marissa Valenzuela. Mere words cannot capture the essence that defined our mother, she was our inspiration and guiding light. She and our father laid the foundation from which we became the people we are today. As an adult, Esther was always positive, humble, and duty bound to her obligations. As a child she had an impishness about her with a disarming smile punctuated by two very pronounced dimples. She was her grandparents’ darling. As a youngster she was frequently sent to the local grocery store to pick up supplies needed by my grandma. On one such day she decided she needed a treat for all her efforts so she decided to charge some penny candy to the household account. Soon this became a habit and ultimately she’d racked up a bill that was equivalent to $10 today. This was an outrageous amount in the 1930s. Fortunately her father found this secretly humorous, as he was a candy-lover himself. Esther learned her lesson about buying on credit, as she had to do several odd jobs to earn enough money to pay the candy bill. It was during this moment that she developed a tremendous work ethic that served her well into her future. As a youth she had several jobs: she picked cotton, babysat, and worked as a domestic in several prominent Mesa households. Her employers were always impressed by her diligence and her desire to learn. Some were unfailing kind to her and one in particular became a mentor, Barbara Stanford, who encouraged her to continue her education. In the summer of “44” Esther worked at Williams Airforce Base preparing the planes for flight during World War II. She was very proud of the fact that she had been part of the “Rosie the Riveter” generation. Esther had an extraordinary life when you consider her humble circumstances. She was born into a segregated society where Mexican-American women weren’t expected to graduate high school or to hope for anything better than becoming a domestic. By sheer will and perseverance she graduated from Mesa High School, Class of 1945. After her marriage she returned to work in the housekeeping unit at Mesa Southside Hospital, where she worked her way up to become a nurse’s aide. Her supervisor thought she was so well suited to nursing that she suggested she train to become a Licensed Practical Nurse. Esther returned to school and earned her L.P.N.; she worked at Southside and Desert Samaritan for over 30 years. During her tenure as a L.P.N. she attended Mesa Community College and earned a certification in Cardiac Critical Care. For a major portion of her career she worked in the Intensive Cardiac Care Unit as a night nurse. Esther was well respected and considered an excellent nurse by her peers, supervisors, and doctors that worked alongside her. In retrospect, Esther, lived a life of service and charity. Values she learned as a child at home and at church. Esther was a life-long Methodist, initially she attended El Redentor Spanish Methodist Church and after 1964, The First United Methodist Church of Mesa, as the two churches merged. Esther was a fantastic sister, wife, mother, grandmother, aunt and friend. She touched many lives and she leaves this earth greatly loved by those who were fortunate enough to have known her.

Our precious mother, Esther Duenas Valenzuela, went to heaven on September 21, 2021 surrounded by the love of her three children. She died at the age of 96, just of 21 days shy of her 97th birthday. Esther Valenzuela was born October 12, 1924... View Obituary & Service Information

The family of Esther Dueñas Valenzuela created this Life Tributes page to make it easy to share your memories.

Send flowers to the Valenzuela family.