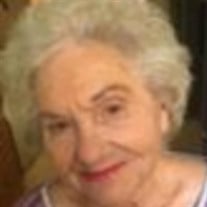 Estela T. Alcantar Our dearly beloved mother, Estela Treviño Alcantar, “Stella,” passed from this life on Thursday, July 23, 2020. Her death was due to complications from the COVID-19 virus. Stella was born on March 27, 1929, in McAllen, Texas to Jesús and Ramona Treviño. As a young lady she travelled throughout Texas with a troupe of famous Mexican singers and entertainers which featured a magician's act. Stella was the beautiful assistant to the magician and was known as “La Mujer Serruchada Viva,” or the lady sawed in half. Much to our dismay, she never revealed how the act was performed and remained true to the magician’s oath. Although this was an exciting part of her life, her greatest joy was cooking and spending time with her many grandchildren. For many years she worked at a local Mexican food restaurant in Mesa where she honed her culinary skills, and much to the delight of the family she became an amazing cook. Stella was a devout Roman Catholic her entire life, so the holidays were especially significant. During Christmas her home was filled with the aroma of delicious tamales, love, and laughter. Together, our mother and father raised nine children and are survived by Herman, Jr. (Debbie), Mary Stella (Mike Barriga), Siboney Castillo, David (Elizabeth), Ramón (Ramona), and Richard (Christina). She also was loved by 21 grandchildren, 27 great grandchildren, and numerous nieces and nephews in Colorado, South Dakota, and Texas. Our mother is preceded in death by her husband and our father, Hermino G. Alcantar and her siblings, M. Carmen Ruíz, Manuel Treviño, Gilberto and Audín Carrillo, and daughters San Juanita Hernández (Nabor, Jr.), Gloria A. Berta (Joe), son Rudy T. Alcantar, grandson Aaron J. Alcantar, and great-grandson Brandon J. Alcantar, Jr. We greatly appreciate the tender care given to our mother, Stella, over the years by the staff at Genesis Mesa Christian Nursing Home. Also, a special thank you to the staff at Banner Desert Medical Center who gave her comfort in the final days and hours of her life. If she could say her good-byes, you’d hear her say, “Diosito los bendiga.” Services on August 3, 2020, will include a private rosary for the family at Meldrum Mortuary, followed by a funeral Mass at 10:00 AM, Queen of Peace, and internment at noon at City of Mesa Cemetery. The family requests no flowers, but rather consider a tribute gift in her honor to the Alzheimer’s Association. Condolences may be expressed through Meldrum Mortuary at meldrummortuary.com.

The family of Estela Trevino Alcantar created this Life Tributes page to make it easy to share your memories.

Send flowers to the Alcantar family.