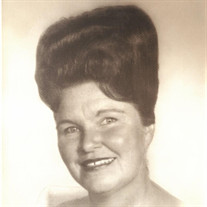 Elva R. Leppla (Benton) 08/24/1926 – 04/04/2021 Queen Creek, Arizona – Mother passed away peacefully in her loving home surrounded by family. She was living with and taken care of by her Granddaughter and Grandson-in-law, Julie and Rick Carrasco and their three boys. Elva was born in Tucson, Arizona in the “Storks Nest” on August 24, 1926. Her family nickname was Toto. Elva spent most of her young life in Tucson, then met her first love in high school, Frank Benton. After graduation from Tucson High School in 1944, she worked at the Tucson City Hall, the University of Arizona, and then as Secretary for the 4-H Club Leader at Oklahoma State University in Stillwater, Oklahoma. That was where her husband at the time was enrolled in the Veterinary Program for 7 years which she later gave herself a “PHTS” award for Putting Him Thru School. Going to Mesa in Feb 1953, she became very active in community organizations. She was a member of the Mesa Jr. Women’s Club and on the State Board for two years and also, a member of the Mahnah Club and Mesa Jaycee Bells. She was very active with fundraisers for the Mesa Lutheran Hospital and became President in 1970. She truly enjoyed being associated with the many organizations needing volunteers. In 1966, she married Henry Leppla and they lived happily ever after for years. Her favorite vacation destination was Mission deep sea fishing, shopping and just enjoying “the closest place to heaven” said Mom. Elva had three children, Suzanne Benton, Dayne Papineau, and son Bradley Benton who passed away on December 21, 2009. She also had six step-children, Maryann Weber, Jennifer Filippi, Lorraine Nelms, Cookie Leppla, Norman Leppla, and David Leppla who passed away on December 21, 2009. She had 15 grandchildren, 26 great-grandchildren and 12 great-great grandchildren. She is survived by her wonderful sister, Karen Dannenbaum of Albuquerque, New Mexico. We will forever miss our Mother/Grandmother and hold her forever in our hearts. She was the most selfless, loving, generous, kindhearted person and loved by all who knew her.

The family of Elva R. Leppla created this Life Tributes page to make it easy to share your memories.

Send flowers to the Leppla family.