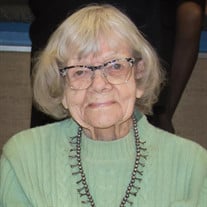 Edna Shill was born on July 18, 1918 at her Grandma Nelsons home in Lehi, Arizona to Frank Erastus and Priscilla Nelson Shill and was the third of eight children. She attended the Lehi Grammar School and Mesa Union High School where she graduated in 1936 and then attended 2 years at the Arizona Teachers College and remained a Sun Devil fan throughout her life. It was said that Edna was humming songs before she could talk. She started singing when she was only 18 months old and she never stopped. Music soon became an important part of her life. When she was 8 or 9 she began taking piano lessons and over the years became a very good pianist, a skill that she has used throughout her life. Edna was a talented seamstress sewing countless items of clothing and quilts for herself and others. Always first searching the clearance section at Sally’s fabrics. We have been clothed in her love! She was a lifelong member of The Church of Jesus Christ of Latter-day Saints having been baptized in the ditch in front of her home. She faithfully served playing the piano for Primary, Relief Society, Ward pianist as well as countless choirs, soloists and funerals. She often accompanied her younger brother Frank for many of his solos. She also served for 15 years as a worker in the Mesa, Arizona Temple. A job with the telephone company lured her away from becoming a teacher. In 1941, after World War II broke out, Edna left the telephone company and went to work at Williams Air Force Base. From there she was transferred to work in the office at the Army Air Force in Deming, New Mexico. After the war she returned to the telephone company in Phoenix. She worked for Mountain Bell for 39 years retiring in February 1982. Edna passed from this life on April 23, 2021 at her home surrounded by loved ones after over a century of loving, meaningful service to her family and her God. She was preceded in death by her parents Frank Erastus and Priscilla Nelson Shill, Siblings - John Shill, Florine Schweikart, William Shill, Marlene Johnson, Fern Bradshaw, and Frank Edwin Shill. She is survived by her loving sister, Ella Nadine Randall and numerous loving nieces and nephews and their children and dozens of empty chocolate ice cream containers.

Edna Shill was born on July 18, 1918 at her Grandma Nelsons home in Lehi, Arizona to Frank Erastus and Priscilla Nelson Shill and was the third of eight children. She attended the Lehi Grammar School and Mesa Union High School where she graduated... View Obituary & Service Information

The family of Edna Shill created this Life Tributes page to make it easy to share your memories.

Send flowers to the Shill family.