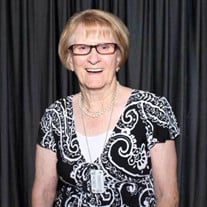 Dorothy Larson Brown Lisonbee was loved by her very large family and extra-large sweep of friends in Arizona and around the world. She was a teacher, school board member, adventurer, historian, traveler, librarian, activity-organizer, and friend. Dorothy was born on Christmas Day, December 25, 1924, in Taylor, Arizona, the last of 8 kids to parents Alof Pratt (1882-1961) and Margaret Smith Larson (1884-1973) who were founders of Lakeside, AZ. She married Robert William Brown, Jr (1921-2010), in 1949 in Mexico, and together they had four children, Jim, Mike, Roy, and Margaret. Later, she married Lorenzo Kenneth Lisonbee (1914-2008) in 1980, in Mesa, AZ, and merged their children into one wonderful family. Together, they have 12 children, over 100 grandchildren, hundreds of great-grandchildren, and their posterity continues to grow exponentially. A lifelong faithful member who lived and loved the Church of Jesus Christ of Latter-day Saints; Dorothy served two missions with her husband, Lorenzo, to Guam-Micronesia in 1984-86, and Ireland in 1989-91. Dorothy graduated from Arizona Teacher's College (now Arizona State University) in 1946, and became an elementary school PE teacher, later teaching 7th grade academics, then eventually teaching Library Science where she innovated new and interesting ways to inspire her students. After her retirement from teaching, she and Lorenzo began to travel the world - both as missionaries and as tourists. They explored Arizona together before expanding to the rest of the country and the world. In her later years, Dorothy volunteered as a leader in several service organizations, including AARP, Kiwanis Club, the Arizona Retired Teachers Association, and the Friendship Village Foundation, where they lived. She also reached out to individuals in great and fun ways such as the annual Dot party for everyone she could find who was named Dorothy (or “Dot”). Dorothy died on 2 October 2021 in Tempe, AZ, and was buried on 6 October 2021 in Scottsdale, AZ.

Dorothy Larson Brown Lisonbee was loved by her very large family and extra-large sweep of friends in Arizona and around the world. She was a teacher, school board member, adventurer, historian, traveler, librarian, activity-organizer,... View Obituary & Service Information

The family of Dorothy Larson Lisonbee created this Life Tributes page to make it easy to share your memories.

Send flowers to the Lisonbee family.