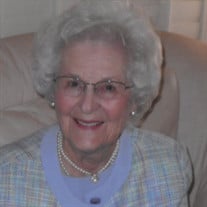 Dorothy Jean Budgett, Mesa, Arizona died August 12, 2019 in Hospice of the Valley, Friendship Village in Tempe, Arizona, She was 89. Dorothy Jean (Vick)Budgett was born on June 2, 1930 in Aberdeen, South Dakota to Jay and Hilda Vick. She... View Obituary & Service Information

The family of Dorothy Jean Budgett created this Life Tributes page to make it easy to share your memories.

Send flowers to the Budgett family.