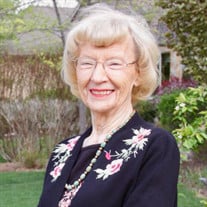 Donna Louise Lax On February 15, 2021, in the early hours of the morning, Donna Louise Lax peacefully passed away. Donna was born on June 7, 1933 in East Chicago Indiana. She was the second child of Homer and Ruby Criswell. Donna grew up in East Chicago, Indiana in the back of a one bedroom shoe repair shop, which was owned and operated by her parents. At a young age, Donna developed a lifelong love of flowers, trees and gardening. Her yard always had beautiful rose bushes, a variety of fruit trees and blooming plants of all kinds. Donna attended Washington High School where she met Ronald Lax. The two of them fell in love and were married soon after Donna graduated from High School in 1951. They were married for fifty eight years until Ronald passed away in 2009. As a child, Donna was raised in the baptist faith. She was a lifelong Christian full of faith, goodness, love, and a desire to follow our Savior. Later, with her husband, she joined the Church of Jesus Christ of Latter Day Saints and continued in her dedication to the Lord. She loved serving in any capacity but was happiest in the Primary teaching, singing, and being with the children. Ron and Donna raised four daughters. The beginnings of their family life were spent in their hometown area of East Chicago and Gary, Indiana. In 1965 they moved to Arizona where they remained, mainly in the Mesa area, where they continued to raise their family. Donna loved to travel the United States with her husband. After retiring, they covered most every state from east to west and north to south. She and Ron would drive clear across the country each summer, usually with Indiana as their destination, while taking various routes and stopping at new places along the way; often times with a few grandchildren in tow. Donna will be best remembered for her unconditional love, her Christian faith, and service to her fellowman. She was kind, thoughtful, and knew the importance of a thank you note and a handwritten letter. She loved her family beyond measure and found her happiest moments visiting, traveling, and laughing with them. We would like to express our appreciation to the staff and residents at Sagewood in Daybreak where Mom lived for the past 5 years. They were wonderful with Mom in every way. She was one of the original residents, moving in shortly after they opened their doors and was assigned as one of their ambassadors, welcoming new residents, lending them a helping hand and offering up her friendship as they adjusted to new living arrangements. She made many new friends there and loved the activities, dances, special speakers and events. Donna is preceded in death by her parents, the love of her life, Ronald, her grandson Desi, and her daughter Vallerie. She is survived by her brother Garland, her three daughters, Ronna (Dennis), Sandy, Sheila (Ted), and 20 grandchildren, and 39 great grandchildren. A memorial service celebrating her life will be held at the chapel located at 10305 E. Southern Ave, Mesa Arizona at 11:30am on February 27, 2021. There will be a viewing prior to the service from 10:30-11:15 at that same location. Following the memorial service, there will be a graveside dedication where her body will be laid to rest next to her eternal companion at the Mesa Cemetery- 1212 N. Center at 1:30. Flowers can be coordinated through Meldrum Mortuary and the Funeral Service can be shared via Zoom - Meeting ID 859 7923 7447 Time:11:15 Standard Time 2021-02-27

Donna Louise Lax On February 15, 2021, in the early hours of the morning, Donna Louise Lax peacefully passed away. Donna was born on June 7, 1933 in East Chicago Indiana. She was the second child of Homer and Ruby Criswell. Donna grew up in... View Obituary & Service Information

The family of Donna Louise Lax created this Life Tributes page to make it easy to share your memories.

Send flowers to the Lax family.