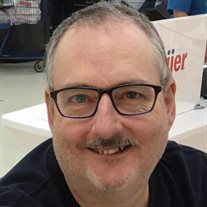 Donald Ray Myers passed away on Friday, March 27, 2020 at home surrounded by his family. Don had been ill for the past 9 months with Liver and Renal Failure. Don was born on November 7, 1956 in Superior Township, Michigan, to Albert Myers of Fairchance, PA and Marian Myers of Hornbeak, TN. Don grew up on Nebraska St. in Livonia, MI. He was a graduate of Franklin High School in 1974, where soon after he joined the Livonia Police Dept. that same year, at just 17 years old. Don went on to earn his Bachelors Degree in Criminal Justice from Madonna University. Don started as a Police Cadet and eventually promoted to Patrolman, as well as serving a time in the Detective Bureau. He graduated the Detroit Metro Police Academy in 1979, earning honors for First Place in Academics and Marksmanship. On May 19, 1979, Donald married the Love of his Life, Kimberly Gail Blomberg. Together they had 4 beautiful children, Donald Ray Jr, Kelly Lynne, Timothy Albert and Thomas Andrew. Over the years, they were also parents to Blackie, Buster, and currently a Beagle named Larry. Don enjoyed being a Father and spending time with his family. He coached his kids in Football, Baseball and Basketball. He loved being a Cub Scout Leader and CubMaster. Many Scout trips and Campouts were taken with Don Jr. from 1987-1996. D-A Camp, Summer Camps, Pinery Camps in Canada, Turkey Bowl, and Ski trips from 1993-1996. Also to Washington DC in 1991, Huntsville, AL to the Space Station in 1994, St. Louis, MO in 1995, New York City and WestPointe in 1996. In July of 1996 they went to Sea- Base in Key West Florida, stopping along the way in Mammoth Cave, KY, Fort Sumpter, SC, white-water rafting in WVA, and Savannah, GA. In addition, the entire family took many trips to Walt Disney World in Florida, as well as traveling to Mackinac Island in Michigan’s Upper Peninsula, and the Grand Ole Opry. Don had a special love visiting Fairchance, PA, where his Daddy was born and raised. He enjoyed seeing Aunts, Uncles and Cousins on each trip. The PA mountains, Fort Necessity, OhioPyle, and Laurel Caverns were his favorite Sites. Following his Daddy, Don became a member of the Livonia Masonic Lodge #586 in the mid-1980’s. He advanced through the ranks, all the way to “Worshipful Master”. On February 16, 1988, Don moved on from Livonia PD to pursue a position with the State of Michigan Commercial Services Division. On October 24, 2004, he transferred to the Liquor Control Commission. Don was promoted to District Supervisor on August 8, 2010. On June 1, 2016 Don retired from the State of Michigan. That summer, he and his family moved to Arizona. Don enjoyed retirement, as a “History Buff”, he enjoyed the History Channel, and Western Movie Classics of John Wayne and Clint Eastwood. He also enjoyed visiting the Range to sharpen his Marksmanship skills. Don was an avid sports fan, with a fondness for the Detroit Tigers, Detroit Lions, Univ. of Michigan, Notre Dame, Green Bay Packers, and Arizona Diamondbacks. In 2018, Don became a Granddaddy to Mia Ryan and her soon-to-be sister Allison Rey this June. He was an amazing Father-in-law to Ryan (husband of daughter Kelly) and to Sara (wife of son Thomas). Don will live on in the Hearts and Souls of everyone that knew him. He was an Angel on Earth and will remain an Angel above in Heaven. A private Family Memorial Service will be held on Wednesday April 29, 2020 at Meldrum Mortuary in Mesa AZ. The family would like to extend their gratitude for all the Love and Prayers they have received during this difficult time. Donald’s final resting place will be beside his Parents at Parkview Memorial Cemetery in Livonia, Michigan.

Donald Ray Myers passed away on Friday, March 27, 2020 at home surrounded by his family. Don had been ill for the past 9 months with Liver and Renal Failure. Don was born on November 7, 1956 in Superior Township, Michigan, to Albert Myers... View Obituary & Service Information

The family of Donald Ray Myers created this Life Tributes page to make it easy to share your memories.

Send flowers to the Myers family.