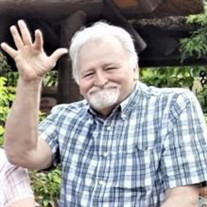 Don Allen Stevenson was more than a best friend to his eternal spouse, Lisa Ann Cooper, when he left this life on December 29th, 2020 at the age of 72. He was a loving father to his ten children, Grandpa to their 23 children and stepchildren and Great-Grandpa to eight great- grandchildren. Don was born on June 30th, 1948 to Myrtle King and Dale Allen Stevenson in Ogden Utah. He was the first of ten and loved being a big brother. Don’s first challenge in life was surviving Polio at a year and a half. He spent the rest of his life fighting the effects of that disease and was determined to never end up in a wheelchair – he never did. He used that same determination when facing all of life’s challenges. Don married his first true love, Sharen Visser (deceased), on December 9th, 1967 when he was 19 and she was 16. They had six beautiful children together: Gary, Robert, Rebecca (deceased), Amyjo, Erica (Kevin), and Emily. During this time Don worked for the Toole Army Depot where he was severely injured doing what he loved – welding. After that, Don worked several different jobs to support his family until he retired at the IRS in 2002. After the unexpected passing of Sharen, Don was fortunate to find love again with Lisa Cooper and they were married on March 25th, 1999. He said she not only made him happy but that she had saved him from the worst time in his life. The truth was, they had saved each other and were good for each other. Lisa had two sons that she brought to the marriage. Don loved them as his own and adopted them after five years together. Adding to his growing family, Don and Lisa also had two more children together. These four children are: Kristoffer (Jenna), Kody, Allyssa, and Cooper. This brought the total count of Don’s children now to ten which he loved equally and greatly. In October of 2005 Don and Lisa moved to Mesa, Arizona for Don’s physical health and have lived there with the youngest four children until the time of his passing. Don loved and missed the mountains of Utah but visited when he could. He will be remembered for the avid hunter and mountain man that he was in his earlier years. Even more so, Don will always be remembered for his love of music. Don would wake up whistling every day, he played the harmonica and sang to all of his children, as well as his grandchildren whenever he could. Don was a gentle and loving man and will be greatly missed by many. Click to join memorial for Don Stevenson https://us02web.zoom.us/j/7048495199?pwd=UnAyeWhQMnczdi9nR1k5U0pXTjRJZz09

Don Allen Stevenson was more than a best friend to his eternal spouse, Lisa Ann Cooper, when he left this life on December 29th, 2020 at the age of 72. He was a loving father to his ten children, Grandpa to their 23 children and stepchildren... View Obituary & Service Information

The family of Don Allen Stevenson created this Life Tributes page to make it easy to share your memories.

Don Allen Stevenson was more than a best friend to his eternal...

Send flowers to the Stevenson family.