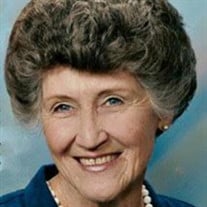 Dixie Mae White Solomon 6/17/1935-1/21/2021 Dixie, 85, passed away 21 Jan 2021 at her home in Queen Creek, Arizona. Born in Mesa, AZ, she grew up on Alma School Road. She is the daughter of Isham Erdy and Annie Belle Garner White. She attended the actual Alma School and Mesa High, where she was involved with music, sports and theater. Sports would play a big part of her life. She caught the eye of Val Solomon at a softball game in Snowflake. They met later that night at a dance and were engaged within 48 hours. They were married in the Mesa Arizona temple on Nov. 23, 1953. Dixie's life was full of service, to her family and her church. She served faithfully in all auxiliaries of The Church of Jesus Christ of Latter-Day Saints. One of her favorite callings was over the sports programs. Dixie served as a full-time missionary in Sydney Australia and as an ordinance worker in the Mesa and Gilbert Arizona temples. She is preceded in death by the love of her life Val, granddaughter London, and her 13 brothers and sisters. She is survived by her children, Craig (Joan) of Snowflake, Delann Denham (Kelly) of Gilbert, Brian (Michelle) of Queen Creek, Warren (Heather) of Queen Creek, Stacey Atchley (Steve) of Idaho, 30 grandchildren, and 44 great-grandchildren. Also, sisters-in-law Shirley White and Nanci White, both of Mesa, and brother-in-law Delwin (Evelyn) Solomon of Joseph City. She will be laid to rest next to her eternal companion in Taylor, AZ on Saturday, January 30, 2021.

The family of Dixie Mae White Solomon created this Life Tributes page to make it easy to share your memories.