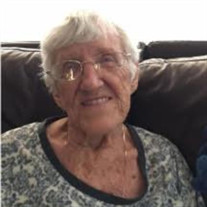 Delphine (Del) Eleanor (Lutostanski) Donnelly, 98, passed away peacefully on September 10, 2021, in New River, Arizona. Her parents escaped from Russian occupied Poland and emigrated to the United States through Rotterdam, Holland, on the vessel New Amsterdam. They arrived at Ellis Island on June 6th, 1910, and settled in Maspeth, New York, a large immigrant polish community. They later moved to Hamtramck, Michigan, at the beginning of the auto industry. There they became parents to Harriet Helen in 1915, Sophia Frances in 1918, and Delphine Eleanor in 1922. Delphine worked through high school to save money to enter a nursing program and was later accepted at Hackley hospital, in Muskegon, Michigan, September 1944. In the first months of her nursing program, students were called into the assembly hall to listen to President Roosevelt’s address of the event of December 7th, 1944, attack on Pearl Harbor. It was at this moment that she vowed to join the Army Nurse Corps after graduating, and in January 1945, she was sworn into the Army Nurse Corps, Second Lieutenant. In April 1945, she sailed from San Francisco Bay, on the Lurline, bound for the Pacific to serve with the 315th Hospital, Manila, Philippines. She served bravely through the Battle of Luzon, and she was honored with the AP Theater Ribbon, W/1 Bronze Battle Star, Philippine Liberation Ribbon, 1 Overseas Service Bar, and the Victory Medal. Upon Delphine’s return to the United States, she worked as a Nurse and in 1950 bought her first home in Trenton, Michigan, an accomplishment that for a young single woman was an event she was proud to have succeeded. Delphine married Michael Joseph Donnelly in 1954 and daughters Kim Ann was born in 1955, Michelle Rose in 1957, and Michael Joseph in 1959. Delphine loved to travel and took every opportunity to visit many countries with friends or family, and at times alone. She kept a world map on her wall and each destination was marked by a colored pin as a memorial to her adventures. She lived her life charismatic and as she so often said carpe diem. Delphine carried within her patriotism and pride of her military service and to those who served this great country. Her wishes were to be laid to rest with her comrades in a place she so loved, Arlington cemetery, where she will receive full military honors. We will miss you dearly Delphine. We will keep your spirit alive in our lives through laughter, love, and not forgetting your words to live by, carpe diem.

The family of Delphine Eleanor Donnelly created this Life Tributes page to make it easy to share your memories.

Send flowers to the Donnelly family.