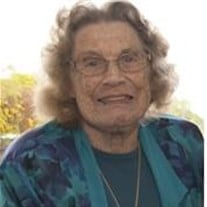 Delene Monette Foresman, 96, passed away August 26, 2019 in Mesa, Arizona. Delene was born February 25, 1923 in Fairmont, Minnesota to Neva and Carl Rowley. Delene is survived by daughters Susan Brenden and her husband James (Mesa, AZ); Catherine Miller (Tempe, AZ); grandson Matthew Miller, his wife Nicole and great-grandson Nick (Chander, AZ; granddaughter Miriam Miller (Mesa, AZ); niece Leslie Hatfield and her husband Alan Stephens, and grand-nephews Alec and Ross (Phoenix, AZ) as well as cousins, nephews, nieces, grand-neices and nephews and friends. Delene was predeceased by her husband Emmett, her sister Audrey Hatfield and her husband Larry, her granddaughter Erika Brenden, son-in-law Mark Miller and her beloved sheltie Sam. Memorial Service to be held on Saturday, September 14, 2019 at 1:00 pm at Meldrum Mortuary 52 N. Macdonald, Mesa, AZ. The family requests (in lieu of flowers) donations be made in Delene’s name to your favorite charity. Delene was born in Fairmont, Minnesota. When she was three, her folks moved to Douglas, Arizona, where she grew up and graduated from Douglas High School in 1940. During high school she was active in music and church. After graduation, she enrolled in the nursing program at Drake University in Iowa. One weekend, while visiting her uncle John Rowley in Guthrie Center, she met Emmett Foresman. They were married Nov. 23, 1941 in Douglas, just two weeks before Pearl Harbor. They then headed north where they homesteaded in Centralia, Washington. In 1944, when Emmett enlisted in the Army, Delene went back to Douglas and worked in the assay office of the Phelps Dodge copper smelter. Upon Emmett’s discharge in 1946, they returned to Centralia where they remained until 1948, when daughter Susan was born, after which they moved back to Arizona settling on a small farm in Double Adobe just outside Douglas. In 1950, second daughter, Catherine was born .They grew a variety of crops and livestock to sustain their family. Delene worked side by side with Emmett, planting, bailing hay, milking cows and goats and dressing out chickens, as well as churning butter and canning vegetables. Being an excellent seamstress, she made most of the girls’ clothes as well as clothes for their dolls. Once the girls were in school, Delene served as clerk of the Double Adobe School Board and worked on the local elections board. She was active in Foothills Christian Church and Border Chapter Order of Eastern Star (past Worthy Matron). Once the girls were in college, she worked for a doctor, a dentist and Cochise Community College. In 1980, when Emmett retired they moved to Sedona, Arizona where they became active members of Wayside Chapel. Delene continued to sew and do needlework. In 2006, they moved to Fellowship Square in Mesa, in 2011 they moved to the Oasis. After Emmett died in 2012, Delene remained at the Oasis until 2018, when she moved to Citrus Manor Assisted Living, Mesa, where she remained until her death. She will be interred with Emmett at the National Cemetery, Phoenix. Delene was a devout Christian. Her favorite saying was “it’s in the Lord’s hands.” She was the consummate helpmate to Emmett and a loving wife, mother, grandmother and aunt. She loved all animals, especially collies and hummingbirds. She was especially proud of the fact that she didn’t have a single gray hair! She was humble, gentle, generous, talented and spiritual. She will be greatly missed.

The family of Delene Monette Foresman created this Life Tributes page to make it easy to share your memories.

Send flowers to the Foresman family.