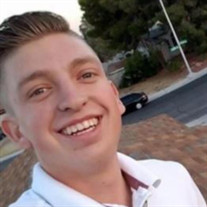 Our beloved David Alan Walter. We are deeply saddened to announce the unexpected passing of our son David Alan Walter, which happened on January 23rd, 2022. David lived to be 23 years old. David was born in Chandler, Arizona on April 29th,1998. He is the second born of Chrystal Bartlett and David Walter. David grew up in Mesa, Arizona where he went to school at Lehi Elementary, Kino JR High, and Westwood High. As a kid, he played league sports in which he was the kicker in flag football, earned the name "the boot" in soccer, played short stop in baseball, and was notorious for his 3-point shots in basketball. In his free time, he enjoyed hanging out with friends, riding his bike, playing video games, going to swim parks, playing basketball and eventually developed a love for golf. At age 16 he got his first job at Genie Carwash and had a new-found freedom as a legal driver. He later accepted a job with Select Adjusters LLC, and was able to start his own company named after his sister, Kendra, called KRW repairs LLC. In his later days, David worked as a supplements manager for Select Adjusters LLC. David was a very unique and special individual. Most of his childhood was spent in a home with his working, single mom and older special needs sister. Although just a kid himself, David was "man of the house." He always had a watchful eye over his mom and sister, and was a great help to both. He brought joy, happiness, and laughter to their lives. Sadly, just before his 16th birthday, his sister passed away. David was a son to a mom who loved him more than anything, the apple of his sister's eye and a best friend to his dad who he became close with in his later teens. He had a small group of friends that he considered family and many people he loved and cared about. In his final years, David fell in love with the woman he was planning to marry, and together they shared 5 animals. He had big dreams and goals, and was working hard daily to achieve them. David touched the lives of so many and will be remembered for his big heart and beautiful spirit. David was preceded in death by his beloved sister Kendra and is survived by his parents, Chrystal and David, half brother Anthony, grandparents, aunts, uncles and cousins. David is also survived by his beloved girlfriend Ashley and their 3 cats and 2 dogs, his close friends, and all those who knew and loved him. There will never be enough words to tell you how much you mean to us and how saddened we are by your passing. "If only" we could have one more conversation, "if only" we could have one more embrace, "if only" we could have one more of everything. .."if only". A life taken too soon. Until we see each other again, my precious son… WE LOVE YOU AND WE MISS YOU! The celebration of David's life for all to join will be held at his favorite hang out, Diamonds Sports Grille. 161 N. Centennial, Mesa, AZ on Saturday February 12th @ 2 o'clock. A gathering will be held for family and close friends to Celebrate the life of David Walter on February 12th @ noon. Information to be given privately.

Our beloved David Alan Walter. We are deeply saddened to announce the unexpected passing of our son David Alan Walter, which happened on January 23rd, 2022. David lived to be 23 years old. David was born in Chandler, Arizona on April 29th,1998.... View Obituary & Service Information

The family of David Alan Walter created this Life Tributes page to make it easy to share your memories.

Our beloved David Alan Walter.
We are deeply saddened to announce...

Send flowers to the Walter family.