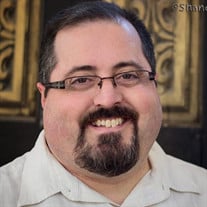 David C. Van Gieson passed away on September 17, 2019, in San Tan Valley, AZ. He was born on April 15, 1968, in Puyallup, Washington to Robert Duncan and Mary Louise (Wheeler) Van Gieson. Being the first grandchild, David received a lot of attention from both grandparents. In his youth, he thoroughly enjoyed riding horses and exploring on his grandfather's ranch. After graduating from Puyallup High School, he submitted his papers to serve a mission for the Church of Jesus Christ of Latter-day Saints. He was called to serve in the Utah Provo Mission which encompassed most of Utah south of Provo. He had fond memories of the time he spent in Gunnison and St. George, so much so that he left his appendix in St. George. He met the love of his life Sheli Rae Cluff when she was visiting her grandparents in Puyallup. A romance blossomed and they were married on April 10, 1992, in the Mesa Arizona Temple. They settled in the Puyallup area where David pursued a career in sales. He was the proud father of three beautiful children, Kelsi Rae, Maquel Bryanne, and Alec Scott. His children and his wife were the joy of his heart and the recipients of many of his playful pranks. He thoroughly enjoyed racing RC cars and playing video games with Alec. Alec would even let him win once in a while. Bike riding was also a passion for David and he enjoyed watching his children compete in BMX riding especially cheering on Maquel. He enjoyed trying new restaurants and making late-night food runs with Kelsi. He was fiercely loyal to his family and took great pride in being the eldest brother, reminding his brothers often. David has always been known for his great sense of humor and quick wit. This often included many pranks and hilarious stories. His infectious laugh and heartfelt conversations will be greatly missed. Starting in 2004, David's health rapidly declined as he experienced several debilitating illnesses that greatly impaired his quality of life. The family moved to Arizona in 2007 due to David's health in hopes that a warmer climate would be beneficial. He struggled in his final years with multiple stays in the hospital and trips to the emergency room. His illnesses further prevented him from fully participating in the activities and gatherings he so dearly loved. Despite the many health obstacles he endured, his love of family and friends never wavered. He was preceded in death by his brothers, Neal and Bryan and brothers-in-law Alan Cluff and Mike Bryant and sister-in-law Allison Van Gieson along with both sets of grandparents. He is survived by his wife Sheli and their three children, his parents Robert and Mary Van Gieson and siblings Yvonne Bryant, Rob (Amy), Jeremy (Jenny), Aaron (Elizabeth), Matthew, Sara Flamm (Daniel), Jonathan, Spencer (Sara), and Stacie Hale (Clifford) and numerous aunts and uncles and nieces and nephews. Services will be held on Thursday, September 26th, 2019 at 11:00 A.M. at the Church of Jesus Christ of Latter-day Saints, Laredo Ranch Ward located at 2559 E Combs Rd, Queen Creek, AZ 85142. Meldrum Mortuary and Bryant Funeral Home are assisting the family with arrangements. Online condolences may be made at www.bryantfuneralhomeonline.com

David C. Van Gieson passed away on September 17, 2019, in San Tan Valley, AZ. He was born on April 15, 1968, in Puyallup, Washington to Robert Duncan and Mary Louise (Wheeler) Van Gieson. Being the first grandchild, David received a lot of... View Obituary & Service Information

The family of David C. Van Gieson created this Life Tributes page to make it easy to share your memories.