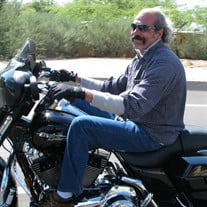 On Monday, October 14, 2019, David Allen Petit, loving son, brother, father and grandfather, was called home to be with the Lord at the age of 63. Dave was born on September 9, 1956 in Hartford, Connecticut to Donald and Florence Petit. At 14 years of age he moved to Chandler, Arizona with his mother, father and his six siblings in September of 1970. His family took 23 days to travel, stopping at every historical site and natural wonder along the way because his parents wanted the kids to see more of this country. At just 18 years old, Dave started working in a machine shop at Walbar, Inc. in Tempe, AZ. On March 4, 1978 he married his former wife, Debra McClain and they raised two daughters, Lisa and Christina and two sons, Christopher and Dave. Then in May of 1986, Dave and his father started his first tooling shop in Chandler, AZ called Petit Tool and Engineering. They built curvic masters for then AlliedSignal (now Honeywell). He went on to start his own shop called Allen Industries in Tempe, AZ where he specialized in tooling and short run production. Dave was an excellent precision tooling and aerospace machinist for over 45 years. Dave had many great adventures and he loved to take his family into the great outdoors. We often reminisce about his “phases” in life because he would completely immerse himself in the experience. It began with the Beach Bum phase where he often took his family down to Rocky Point to enjoy the beach and camp. Then, one day he came home and said he bought a horse and seriously began to cowboy up. He joined the Phoenix Jaycees Comancheros, riding in parades, the Pony Express, helping with rodeos and running the Christmas party for underprivileged youth in true western fashion. He also became a skydiver and followed that passion for several years. Finally, he upgraded to a steel horse and found himself most at home on his Harley Davidson. Through it all he worked many long hours at the machine shop, a perfectionist at doing his job and doing it right. He was an incredibly intelligent, hardworking, rough and tumble, unfailingly generous, kind-hearted man who will be sorely missed. He is survived by his four children, Lisa (Jecoby) Keiser, Christina Petit, Christopher Petit and Dave Petit with Debra McClain, his twelve grand-children, Alicia, Christian, Logan, Adrianna, Sakura, Katana, Adrian, Ethan, Nova, Oriana, Amelia, and Titan and one great-grandchild Xavier, his parents, Donald and Florence Petit, his siblings, Joyce (Don) Scherrer, Sandra (Dave) Ellis, Wayne (Jane) Petit, Sharon (Lance) Ruffner, Douglas Petit, and Jeffrey (Renea) Petit. A funeral service will be held on Saturday, October 26, 2019 at Broadway Christian Church, 7335 E Broadway Rd, Mesa, AZ 85208, with the viewing at 10 a.m. and the service at 11 a.m. A gathering will follow off-site at 12:30 p.m., details provided at the service.

On Monday, October 14, 2019, David Allen Petit, loving son, brother, father and grandfather, was called home to be with the Lord at the age of 63. Dave was born on September 9, 1956 in Hartford, Connecticut to Donald and Florence Petit. At... View Obituary & Service Information

The family of David Allen Petit created this Life Tributes page to make it easy to share your memories.

Send flowers to the Petit family.