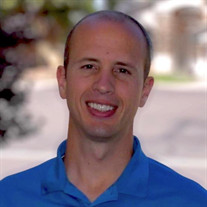 Daniel Kimball Higgins, 42, of Mesa, Arizona, passed away peacefully surrounded by his family on August 13, 2021, after a 12-year battle with Chronic Myelogenous Leukemia. He leaves behind his loving wife, Tiffany (Carpenter), and four wonderful children, Elizabeth (15), Reed (13), James (9), and Jase (7). Daniel was born in Mesa, Arizona on September 22, 1978 to Harold “Dan” Higgins and Diana Christine Stewart. He is the seventh of ten children: one girl and nine boys. Daniel spent his childhood in Gilbert, Arizona, graduating from Gilbert High School in 1997. He was very physically active, playing football, volleyball, and wrestling. Daniel served a mission for the Church of Jesus Christ of Latter-day Saints in Eugene, Oregon from 1998-2000. He attended Eastern Arizona College, Mesa Community College, and Arizona State University, obtaining a Bachelor’s degree in Political Science. He later earned a Master’s Program in Real Estate Development. Daniel married Tiffany Carpenter on March 9, 2002 in the Mesa, Arizona Temple and raised four beautiful children together. Daniel worked for the government doing real estate for various government agencies. He worked for the town of Buckeye as the Events Director and Parks Developer. He later became a private real estate agent, then a real estate broker. He served in his church as a young men’s leader, financial clerk, primary teacher, ward clerk, and member of the Elder’s Quorum Presidency. In addition to his wife and four kids, Daniel is survived by his mother, Diana Christine Stewart Higgins, siblings Deborah (Don) Haslem, Dane (Maryna) Higgins, Derrel (Heidi) Higgins, David (Becky) Higgins, Derek (Nancy) Higgins, Dustin (Melinda) Higgins, Doug (Susie) Higgins, Dallin (Julie) Higgins, and his many aunts, uncles, cousins, nieces, and nephews. Daniel is preceded in death by his father, Harold “Dan” Higgins and brother, Drew Higgins. Daniel is well-loved by his many friends and family alike. He will always be remembered for his focus on relationships, his tenacity, his bravery, and his good example as a believer in Jesus Christ. Visitation will be held for Daniel on Thursday, August 19, 2021 from 6-8pm at the LDS Church located at 633 S Higley Rd., Mesa, Arizona. His Funeral Service will be held the next day from 10-11:30am at the same location. Graveside service will be at noon at the Mesa City Cemetery. Donations can be given through Venmo to @Tiffany-Higgins-10

Daniel Kimball Higgins, 42, of Mesa, Arizona, passed away peacefully surrounded by his family on August 13, 2021, after a 12-year battle with Chronic Myelogenous Leukemia. He leaves behind his loving wife, Tiffany (Carpenter), and four wonderful... View Obituary & Service Information

The family of Daniel Kimball Higgins created this Life Tributes page to make it easy to share your memories.

Send flowers to the Higgins family.