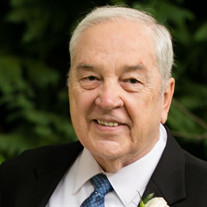 Cletus Ferdinand Heyd, 77, passed away peacefully at home on July 16, 2019. Born on November 3rd, 1941, in New Orleans, LA. Married to Anita Fagan Heyd for 53 years. Survived by children Rodney Steven Heyd (Kristin Sohn) of Tucson, AZ, Kenneth David Heyd (Bree Robbins) of Gilbert, AZ, Richard Allan Heyd (Laura Petschl) of Seattle, WA, and Deborah Kay Heyd of New Orleans, LA, and grandchildren Logan David Heyd, Aubrey Annabelle Heyd, Ellie Kathleen Heyd, and Harper Ann Heyd. Preceded in death by mother Alma Ethel Miller & father Cletus Frederick Heyd, Sr, sister Marie Heyd Kubnick and grandson Gavin Blake Heyd. Clete started his shenanigans at a young age in New Orleans “guarding” cooling beignets in the windows of local bakeries. He was also good at finding “missing” stop signs on the side of Metairie Road. Later in life, Clete was passionate about preventing scurvy, handing his new daughter in law a lime during his son’s wedding ceremony (you can never be too careful). He enjoyed a good Mardi Gras parade, and was willing to risk bodily harm to catch a shoe thrown from a float. He was also an avid watcher of the show “Steinfeld,” (Yes, we know it’s Seinfeld!) and always left everyone wanting more. Anita and Clete’s loving 53 year marriage began with a meeting at the Woolworth lunch counter, followed by their first date at the Jefferson Downs Racetrack where they both won big! Married on June 4th, 1966, they cast their fate to the wind. Clete’s career with F. W. Woolworth, Woolco,and finally Ross Dress for Less, took Cletus and Anita west to finally settle in Mesa, AZ, where they resided for 46 years and raised their family. Clete was a proud father and doting grandfather. He was a kind and gentle soul, who could always be counted on to diffuse difficult situations with his dry humor. He was a good and decent man who loved his family and was very proud of his children and the adults they grew into. He loved camping and fishing with his children, especially in the White Mountains of Arizona and Rocky Point, Mexico. Passing on the cultural traditions of his childhood such as fishing, crabbing, crawfishing, or just skipping rocks was very important to Clete. All his children benefited greatly from his experiences and his wisdom and were always excited to learn from him. He is missed so very much.

The family of Cletus Ferdinand Heyd created this Life Tributes page to make it easy to share your memories.

Cletus Ferdinand Heyd, 77, passed away peacefully at home on...

Send flowers to the Heyd family.