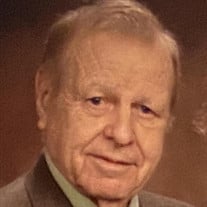 Clayton Hale Rector 5/28/1928 – 11/21/2021 Clayton H. Rector passed away on November 21, 2021. He was survived by his wife of 70 years, Rosa Davault Rector, who sadly joined him nine days later on November 30, 2021. He is survived by his children Ron (Laurie) Rector, Brenda (Ed) Harris, Rick (Sandy) Rector; two grandchildren Joshua (Jessica) Harris, Jillian (Zac) Canale; 4 great-grandchildren Cade Canale, Logan Harris, Wyatt Harris, and Sadie Canale; brother Ben (Zell) Rector. Clayton was born and raised in Marshall, North Carolina and later served over 20 years in the United States Air Force, rising to the rank of Master Sergeant. The Air Force sent him around the world, landing him in Nagoya, Japan and into the jungles of Viet Nam. Clayton retired to Dallas, TX in 1968 where he worked as an Insurance Claims Adjuster for the next 10 years. After moving to Mesa, AZ he finished his career as Mesa Community College’s Groundskeeper, retiring a second time after 12 years. He enjoyed fishing, mom’s cooking, telling jokes and making people laugh, tinkering with anything mechanical, and could fix anything with an engine. Clayton loved spending time with his family and friends, dancing, had a definite sweet tooth, and loved watching Seinfeld, Family Feud, and Fox news. He particularly enjoyed an unplanned adventure while road tripping, never failing to remind whichever kid was driving to “slow down!” And of course, he loved the Dallas Cowboys, who have lost a true fan. He will be dearly missed by his family and friends. Celebration of Life memorial services will be held on Saturday January 15, 2022, at the First Assembly of God church located at 651 N. Ocotillo Drive in Apache Junction at 11:00 A.M. Internment Northern Nevada Memorial Cemetery Fernley, Nevada

The family of Clayton Hale Rector created this Life Tributes page to make it easy to share your memories.

Send flowers to the Rector family.