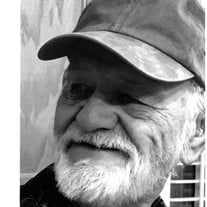 Claude Duane Spears "Papa" was called home to the Lord's ranch on the evening of the 17th day of January in the year 2020. He was a spry 82 years old. Duane entered this world as a blessing to his mother Hazel Irene Windsor and his father Claud Lewis Spears in Bisbee, Arizona on October 20, 1937. Born to the cowboy way of life, Duane would spend his youth on a ranch outside of Bisbee learning the life would instill his passion for a return to the simpler, purer, more honest way of life. In time, Duane would move to Claypool, Arizona and attend Miami High School. While "studying" in the library, Duane would encounter a shy Lee Lois Guynes. He became very smitten with Lee and after much persistence, he finally won her over. They eloped soon after and the love they shared was legendary. They were married for 62 years. To put that into perspective, they don't even make Hallmark cards to congratulate that many years together. They never left each other's side. Duane served honorably at home and overseas on the U.S.S. Chevalier in the United States Navy. After serving his country, Duane attended and achieved his Masters at Arizona State University. He excelled at Geology, Archeology and English. During his time at the college, Duane helped at several dig sites. He helped uncover artifacts at the Casa Grande Ruins and helped discover at least one cliff dwelling. Duane went on to work for several mining corporations. Papa's everlasting memory and legacy is carried on by his wife, 4 children, 8 grandchildren and his 9 great-grandchildren. Duane's son, Steven, at the age of 18, preceded him into the arms of God and no doubt welcomed him home. Duane was a loving husband, father, brother and friend. He was truly salt of the earth with a kind heart and soul to match. He would give you his last dime if you were in need, even if it meant he had to sacrifice elsewhere. His laugh was distinct, uncontrollable and infectious. You always felt appreciated and safe in his company. Whether it be a pat on the back, a shoulder squeeze, or, a loving hand on your hip in the kitchen; he let you know that you were loved. We feel your love and presence all around us Papa and as you always told me.....see you mañana my friend.

Claude Duane Spears "Papa" was called home to the Lord's ranch on the evening of the 17th day of January in the year 2020. He was a spry 82 years old. Duane entered this world as a blessing to his mother Hazel Irene Windsor and his father... View Obituary & Service Information

The family of Claude Duane Spears created this Life Tributes page to make it easy to share your memories.

Send flowers to the Spears family.