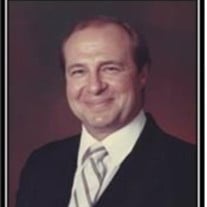 Charles (Chuck) Ronald McCurdy passed away on Monday, February 22, 2021 in Tempe, Arizona at the age of 82. He was a loving husband and father of 8 children. He was born on May 2, 1938 in Nampa, Idaho to Charles (Mac) and Vaudis (Chidester) McCurdy. Long before receiving a degree in accounting at Idaho State University, he was an iron worker and welder who labored beside his father at McCurdy Steel. After working as a CPA for a firm in Phoenix and Alaska, he took a job as Treasurer of the Northwest Territories in Yellowknife, Canada. He then transitioned into flipping real estate in Edmonton, Alberta and Phoenix, Arizona. His passion for music led him to play clarinet and saxophone. He also liked traveling, sailing, scuba diving, boxing, playing chess and cribbage, collecting brass and classic cars, and helping others in any situation. He was blessed with a cheerful confidence and always focused on positive results. He approached any task placed before him with determination and a knowledgeable attitude. He was a counselor in a bishopric, worked with the Cub Scouts and taught Gospel Doctrine in the LDS church. He loved the Lord as much as life itself. Many spoke of the twinkle in his eyes when he smiled and how his mischievous sense of humor was contagious. He will be incredibly missed by so many! Chuck was preceded in death by his father, Charles (Mac), his brother, Lance, and his daughter Debra. He is survived by an amazing mother, Vaudis (who is 101), his loving wife, Ellen, his brother, Don, his sister, Jodi, his children, Steve, Scott, Paul, Nik, Susan, Michelle, Megan, and a landslide of grandchildren and great grandchildren. A funeral service will be held on Friday, March 5th, 2021, at 5pm (public viewing 4pm) in the LDS chapel at 6001 S Lakeshore Dr.,Tempe, AZ, 85283. His interment service is on Wednesday, March 10th, 2021 at 11:00am, at Memorial Lakeview Cemetery, 1640 Lakeview Dr, Bountiful, UT, 84010. Flowers or donations may be sent to 1417 E Whalers Way, Tempe, AZ.

Charles (Chuck) Ronald McCurdy passed away on Monday, February 22, 2021 in Tempe, Arizona at the age of 82. He was a loving husband and father of 8 children. He was born on May 2, 1938 in Nampa, Idaho to Charles (Mac) and Vaudis (Chidester)... View Obituary & Service Information

The family of Charles Ronald McCurdy created this Life Tributes page to make it easy to share your memories.

Send flowers to the McCurdy family.