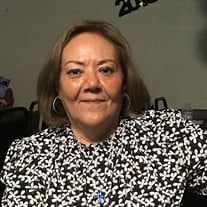 On Sunday, September 6, Maria Catalina Moran passed on at the age of 69-years-old after losing her battle against Colon Cancer. Affectionately known to friends and family as Cat, she was a devoted wife, mother, and grandmother. Cat is survived by her husband Daniel, three children Stephanie, Daniel Jr., and Catherine, three grandchildren Noah, Kohda, and Dash, and her sister Norma Wilson.  Cat was born in Nogales, Sonora, Mexico on January 10, 1951. She immigrated to the United States in 1955 and spent most of her life in Nogales, Arizona. After graduating from Nogales High School, Cat spent her time attending junior college and traveling across Europe. She would later recall her travels and love for Germany and Spain. Two countries she adored because of their bustling cities and vibrant cultures.  At a young age, Cat became an Administrative Assistant for Nogales Public Schools. It was where she would meet her husband Dan, a young educator from Yuma, Arizona. The two wed in 1975, had three children, and celebrated 45-years of marriage this past July.  In 2013, the two retired and moved to Mesa, Arizona to help care for their three grandchildren. Cat was a devoted and loving grandmother. She spent her final years caring for them. When asked what they will miss most about their Grandma each said: “Eating breakfast with her. Her eggs were the best! Oh, and going on walks with her,” said Noah M. (age 7).  “I miss always painting with grandma. I miss her food and trips to Target,” said Kohda K. (age 4).  “I miss grandma and her soup,” said Dash K. (age 3). Her memory and spirit will live on through the love they have for their grandmother.  The celebration of Cat’s memory will be held at Queen of Peace Catholic Church in Mesa, Ariz. on Friday, September 18 at 10 a.m. A virtual mass will be broadcasted live for family and friends unable to attend. Click to view online services https://www.youtube.com/watch?v=cdSgk9UqOdc In place of flowers or gifts, the family in her honor request that you make a donation in her name to St. Jude’s Hospital, Phoenix Children’s Hospital, or American Cancer Society.

On Sunday, September 6, Maria Catalina Moran passed on at the age of 69-years-old after losing her battle against Colon Cancer. Affectionately known to friends and family as Cat, she was a devoted wife, mother, and grandmother. Cat is survived... View Obituary & Service Information

The family of Catalina Maria Moran created this Life Tributes page to make it easy to share your memories.

On Sunday, September 6, Maria Catalina Moran passed on at the...

Send flowers to the Moran family.