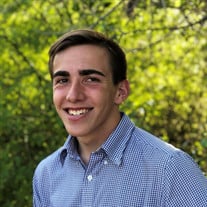 Carson Gause, 20, was suddenly taken from this earth on Tuesday, March 15th, 2022. Carson was born on Sunday, March 18th, 2001 in Mesa, Arizona. After a complicated high-risk pregnancy, he came into this world with no pulse. By the grace of God and the skilled hands of nurses and doctors he was brought back to us. We were blessed immeasurably to have 20 bonus years with our miracle baby. As a little boy, Carson loved all things cars. He even slept with toy cars in each hand and was affectionately known as Car-Car by those close to him. His love for cars continued through his childhood, teen years, and into adulthood. He had recently started school to become a Toyota certified mechanic and was excelling in school. Carson’s warmth and kindness was often felt by everyone in his presence. He smiled with his whole soul and his laugh was contagious. He was always looking for ways to help and serve others. As a teenager, he was often found taking out garbage, cleaning up around the house, or doing the dishes because he always wanted to help. When Carson was 5 years old, his family opened their home to children in the Arizona foster care system and he became a brother to dozens of children over the years. He was the best big brother any of his siblings could have asked for. He would help get his younger siblings dressed and even change diapers without being asked, and often took them on fun outings just because he enjoyed spending time with them. He worked alongside his stepdad Josh, mowing the lawn Saturday mornings, cleaning, fixing needed items around the house and oh how he loved Josh’s cooking. He never complained of the work that needed to be done. He freely and willingly gave of his time and talents whether helping a neighbor, volunteering at a soup kitchen, or helping renovate a community center for foster children. Serving others brought him joy. The ocean was Carson’s happy place and he enjoyed many vacations with his family to Rocky Point. He loved to travel, whether it was a cross-country road trip with his family, or traveling with his uncle as a member of Chapo Racing. During his youth, Carson enjoyed running track and field, and singing with his school choir. Some of his most cherished memories were performing with the choir at places like Carnegie Hall and Walt Disney Concert Hall. He loved music, loved to sing and had the voice of an angel. He was a good listener, good adviser, and good friend to many. Just before his 18th birthday Carson met Kate Simmons during a choir trip. They quickly started dating and became inseparable. He loved her with all his heart and planned to marry her after she finished law school. Her parents and brother became family to him. He is survived by his parents, Anika and Josh Robinson, his father Steve Gause, his siblings Austen and Mirtha Gause, Alesa Gause, Mckay Robinson, Anna Robinson, Ethan Robinson, David Robinson, and Alex Robinson; his sweetheart Kate Simmons; grandparents Reyel and Mary Alyce Taylor, Steve and Toni Gause, Helen Gause, Sue Robinson, numerous aunts, uncles, and cousins. He was preceded in death by his Uncles Reyel Taylor, Adam Gause, and Grandfather David Robinson. CELEBRATION OF LIFE INFORMATION Saturday March 26th, 2022 Viewing @ 10:30 am Funeral @ 11:45 am Graveside Dedication @ 2 pm Celebration For Family Members to Follow Dedication VIEWING AND FUNERAL SERVICE TO BE HELD AT The Church of Jesus Christ of Latter-Day Saints 234 N. Greenfield Rd. Gilbert, AZ 85234 FINAL RESTING PLACE AND GRAVESIDE SERVICE Mesa Cemetery 1212 N. Center St, Mesa, AZ 85201 “Your Wings Were Ready But Our Hearts Were Not.”

Carson Gause, 20, was suddenly taken from this earth on Tuesday, March 15th, 2022. Carson was born on Sunday, March 18th, 2001 in Mesa, Arizona. After a complicated high-risk pregnancy, he came into this world with no pulse. By the grace of... View Obituary & Service Information

The family of Carson Gause created this Life Tributes page to make it easy to share your memories.

Carson Gause, 20, was suddenly taken from this earth on Tuesday,...

Send flowers to the Gause family.