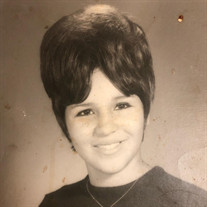 Carmen Sylvia Reyes, 71, passed away peacefully surrounded by her loved ones at Tempe Saint Luke Hospital on October 15, 2021. Sylvia was born to Alex and Lupe Mendivil on July 16th, 1950, at Tempe Community Hospital. Sylvia was the eldest of eight children. She had six brother and one sister and their spouses, Alexander, David and Rita, Daniel and Maria, Abraham and Noelle, Paul and Joann, her late brother John, Veronica and Anthony. Whilst growing up in Victory Acres, Sylvia enjoyed frequent trips to Tempe Beach, picnics at Falcon Field Community Pool, and all-day adventures at the Verde River with her siblings and cousins. As a teenager, Sylvia was a huge Beatles fan where she would listen to their records repeatedly with her cousins Norma Zambrano and Linda Reza. She even attended the Beatle’s movie a Hard Day’s Night at the Fox Theatre in Phoenix. At the age of 19, she began her life as a mother. She had an infinite amount of love for all her children. As Sylvia’s family grew, her love continued to pour out to her grandchildren and great grandchildren. It didn’t stop there, all who knew her felt an immeasurable warmth by her presence. Sylvia lived a simple, easygoing, and happy life as she enjoyed scrapbooking, reading, and collecting chimes. She enjoyed sports of all kinds, but she loved football. She started out as a Washington Redskins fan like her brother Danny (Ito) until the Cardinals came to Arizona where she jumped ship to root for her home team. She looked forward to the yearly family camping trip where they took hikes to the sinkhole, fished at Willow Springs, and had late-night campfire conversations filled with lots of laughter and love. She came to the apostolic faith in the late 70s where she began her devotion to God. She faithfully attended the house of God up until her last days. Sylvia was preceded in death by her granddaughter Cienna Rae Valenzuela. She is survived by her children Lori Fajardo, John Fajardo, Tammy Reyes, Alex Reyes, Rosemary Reyes, and Sara Valles, along with 22 grandchildren and 12 great grandchildren. Sylvia, a daughter, sister, mother, tia, cousin, and friend will be dearly missed and will always live on in our memories.

Carmen Sylvia Reyes, 71, passed away peacefully surrounded by her loved ones at Tempe Saint Luke Hospital on October 15, 2021. Sylvia was born to Alex and Lupe Mendivil on July 16th, 1950, at Tempe Community Hospital. Sylvia was the eldest of... View Obituary & Service Information

The family of Carmen Sylvia Reyes created this Life Tributes page to make it easy to share your memories.

Send flowers to the Reyes family.