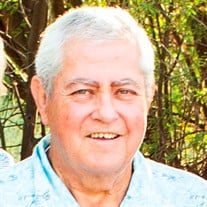 Carl Derrington was born July 8th, 1950 to Jewel and Milton (Doc) Derrington, in Pueblo, Colorado. He had two older siblings, Dennis, M.D. and Gayle, and a younger sister, Dianne, of Mesa. Carl's faith and character were greatly influenced by the fact of the painful and limiting effects of polio in his right leg at 6 months, AND a deterrent from playing his beloved baseball. He said recently that without polio he would have pursued baseball and might not have followed His Savior. He, with his family, was blessed to be in a wonderful little rural church, pastored by a descendant of Jonathan Edwards, where Carl received a great spiritual foundation, and memorized LOTS of Scripture. He was even baptized in a river as a teen. On a Gates Foundation Scholarship, he attended the University of Northern Colorado and then completed his PhD in Solid State Chemistry at Arizona State University, followed by a post-doctorate position at Brown University. While at ASU, besides enjoying the best years of Jim Brock ASU baseball, Carl taught High School Sunday School and mentored a group of 12 teens at home. Later, Carl served at FCOV as the Nursery Coordinator for at least 2 yrs, and taught a SS class. As an Elder for 10 yrs, he was respected for his quiet wisdom. Carl & Colleen were involved with settling two Cambodian refugee families, and throughout the years provided a temporary home for several people. They were involved with the FCOV "A Time for Us" Marriage Ministry for its duration, and finally, Carl built several boxes for the FCOV Community Garden. Carl started his career at Motorola, then moved on to the new start-up, Three-Five Systems in Tempe for 20 years, which included building/managing factories in three Asian countries where the focus was on high volume manufacturing of displays for devices like cell phones, etc. Carl had been a senior executive for several years when he left. He finished his career as an operations consultant which, as we understood it, consisted mostly of chastising people for being inefficient. He always enjoyed figuring out problems, streamlining processes, and coming up with more efficient ways to do everything from complex manufacturing to how to brew the fastest cup of coffee. He passed away suddenly, but peacefully, on Saturday, November 30th 2019. Although the whole family has been quite shocked and devastated by this loss, we take comfort in the knowledge that he is rejoicing in the presence of his Creator and Savior, and has been reunited with much of his family. Carl is survived by his wife Colleen, son Eric (Sabrina, M.D.), daughter Becky (Jeff), sister Dianne (Brian), and all of his adoring grandchildren, Maggie, Miles, Canaan, and Nolan, as well as nieces, nephews, and extended family. A celebration of his life will be held on Sunday, December 22nd at 2:30pm at Faith Church of the Valley, 2125 E Chandler Blvd/Cooper, Chandler 85225, 480-838-6559. In lieu of flowers, please consider making a donation in Carl's memory to Christian Family Care, 800-939-5432, CFCare.org or Sunshine Acres Children's Home, sunshineacres.org, 480-832-2540. There is a memorial website at meldrummortuary.com with information. It also provides for your comments, stories, and pictures which would be greatly valued and appreciated. "Rejoice always; pray without ceasing; and in everything give thanks; for this is God's will for you in Christ Jesus." 1 Thessalonians 5:16-18 For condolences, the family can be reached at 518 S Churchill Drive Gilbert, Arizona 85296.

The family of Carl Derrington created this Life Tributes page to make it easy to share your memories.

Send flowers to the Derrington family.