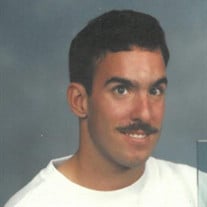 Brian Schult, 51, unexpectedly went home to be with the Lord on January 5th, 2022. Brian was born on October 17th, 1969 to Carl and Linda Schult. Brian was one of God’s special angels who was full of life and definitely a people person. Brian attended Preschool at Marc Center and then went to Parkway School for Special Needs students that had opened the previous year. His first year there was also Barb Barbers first year teaching there. One of Barb’s fondest memories of Brian was that for whatever reason Brian always had to have a red pencil. She would give him an identical, but black pencil and he would give it right back to her and ask for a red one. When Mesa Public Schools decided to start a pilot program to integrate special needs students into the regular schools, Brian was selected to participate. When Brian was eight years old, he started participating in Special Olympics. They say that victory is a small part of it, that everyone is a winner. Not sure that was true with Brian, he always wanted the medal, preferably Gold. In his twenty plus years of competing he has well over 100 medals and ribbons, mostly medals and yes a lot of Gold. One of our favorite memories is at a State Championship Basketball game when he was 18 or 19. His dad was up in the bleachers yelling “Encouragement” to him when Brian stopped, turned around and yelled back “shut up”. Well that pretty much said who was the boss, The Coach. In 1989 Brian was selected outstanding athlete for the State of Arizona. Special Olympics appeared at halftime of the Cardinal/Redskins football game. Brian carried in the torch to light the Olympic flame. Brian finished his school years graduating from Mesa High in 1990. After graduating Brian continued participating in Special Olympics for several more years. Being a very independent young man, Brian moved into a Marc Group Home where he has been for over twenty years. His favorite thing was to come home for the weekend and long holidays, spend time at our cabin up north and to spend time at his sisters. He also loved visiting with family and friends, listening to country music and going out to eat. Brian is survived by his parents Carl and Linda Schult, his sister Tina Weissert and her children Brady, Jenna and Parker. Brian touch the lives of many, many people and will be dearly missed. Due to Covid, there will be no service. For anyone who wishes to, donations may be made in Brian’s name to Marc Center 924 N. Country Club Dr Mesa, AZ 85201

Brian Schult, 51, unexpectedly went home to be with the Lord on January 5th, 2022. Brian was born on October 17th, 1969 to Carl and Linda Schult. Brian was one of God&#8217;s special angels who was full of life and definitely a people person.... View Obituary & Service Information

The family of Brian Eugene Schult created this Life Tributes page to make it easy to share your memories.

Brian Schult, 51, unexpectedly went home to be with the Lord...

Send flowers to the Schult family.