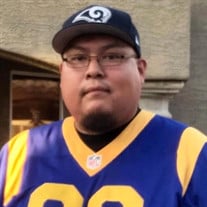 BRENNAN LEIGHTON SORRELL Brennan L. Sorrell, Mesa, AZ passed away on March 9, 2021 at the age of 41 while undergoing heart surgery. Brennan was born in Gallup, NM, and is the firstborn son of Ralphina and Charles Sorrell. Originally from the Navajo Nation, he was Navajo and Choctaw. His Navajo clan (maternal) is Tódich'ii'nii (Bitter Water) born for (paternal) Tó'aheedlíinii (Water Comes Together). Brennan lived a majority of his life in Mesa, AZ and is survived by his mother; Ralphina Sorrell; his daughters, Rain, ReiAnn, and Saya Sorrell; his younger brother Clinton Sorrell and his maternal grandmother Grace Jewell. He is preceded in death by his father Charles Sorrell, aunt Cheryl Sorrell and grandfathers Benjamin G. Sorrell, Sr. and Jack Jewell. Brennan’s paternal grandfather Benjamin Sorrell, Sr. of Lukachukai, AZ served as a Navajo Code Talker in WWII. He is also preceded in death by his maternal grandparents Ralph and Ann Bennett, Sr. of Window Rock, AZ, uncles Leon and Alvin Adikai, Jr. and his great grandmother Marie Keedah of Cross Canyon, AZ. Brennan attended Adams and Jefferson elementary, Powell Jr. High, and graduated in 1997 from Westwood High School. Throughout his high school years, he was a member of the student advisory council and played saxophone for the school marching band. Awards and accomplishments included: honor roll member, excellence attendance and music participation awards. During his last year in high school, he was awarded a 2-year Minority Scholars Program scholarship and attended Ohio State University in Columbus, OH. He majored Computer Science with the intention of creating video animation and special effects. Inspired by monster and zombie films, Brennan considered enrolling in Tom Savini’s Special Make-Up Effect Program in Pennsylvania for character make-up and design for film and TV. He also attended Mesa Community College’s theatre program to participate in stage make-up and effects. One of his favorite movies was Night of the Living Dead produced by legendary director George Romero. Brennan was employed with the Salt River Pima-Maricopa Indian Community at Casino AZ and Talking Stick Resort in Scottsdale, AZ for over 20 years. In 2006, he married Samantha Zotigh and during their marriage they welcomed three daughters, who were the most important part of his life. He was a lifelong LA Rams fan. As a season ticket holder, he made many trips to LA to attend live home or AZ game events with his brother and/or other close friends. He also was a big fan of WWE Wrestling events and made every effort to attend Wrestlemania events with his family members. If he couldn’t attend, he would host family BBQ’s and watch live events at home. And whether it was LA Rams game or WWE event, he would always purchase jerseys and t-shirts for his family and friends. He enjoyed listening to rock and “old school” rap music and attended many live concerts. He also enjoyed family activities such as bowling and taking his family to video arcade venues and movie theatres. His favorite films were Lord of Rings/Hobbit Trilogy, Super Hero Movies, and Star Wars to name a few. Favorite TV show’s included The Simpson’s, Courage the Cowardly Dog, and The Walking Dead. Ever since he was a young boy, he loved playing video games. In his later years his favorite activity was playing NFL and NBA video games with his brother Clinton. He was an avid toy collector of popular toys from the 80’s and 90’s such as Teenage Ninja Turtles, Transformers, and Voltron to name a few. He also loved to build toy car models. His favorite car model was the SS Chevy Monte Carlo and he also owned about 3 of them during his lifetime. His life revolved around his daughters. As a single dad he did all the cooking for them, assisted them with homework and attended all school events particularly the annual Daddy Daughter Dance. He made family trips every year to Disneyland and/or Universal Studio’s during their spring and/or fall break. Brennan was a devoted father, brother and son. He was a gentle person and one of the most generous of human beings. Well loved by all family and friends near and far. He will be deeply missed by all who knew him. Due to Covid-19 there will not be a public service. However, for those who wish to pay their final respects. Visitation is scheduled for 5-6 pm for immediate family members only and 6-8 pm for the additional friends and family on Thursday, March 18 at Meldrum Mortuary Chapel located at 52 N. MacDonald St., Mesa, AZ, 85201. Graveside services are scheduled for Friday, March 19 at 10:00 am. Location is Lehi Community Cemetery at 926 E. Thomas Road, Mesa, AZ 85203. Dress is casual and optional color to wear is LA Rams colors. Information for online donations has been set up on Brennan’s social media sites for GoFundMe, Zelle, Venmo, and PayPal. Donations can also be made during visitation. Flowers can be sent directly to Meldrum Mortuary.

BRENNAN LEIGHTON SORRELL Brennan L. Sorrell, Mesa, AZ passed away on March 9, 2021 at the age of 41 while undergoing heart surgery. Brennan was born in Gallup, NM, and is the firstborn son of Ralphina and Charles Sorrell. Originally from the... View Obituary & Service Information

The family of Brennan Leighton Sorrell created this Life Tributes page to make it easy to share your memories.

Send flowers to the Sorrell family.