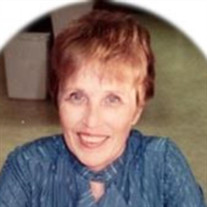 The sunlit smile Beverly Anne Ferguson shone on this world rose on Saturday, October 20, 1934, and set on Monday, August 23, 2021. Beverly is survived by her husband, Jerrell Ferguson; stepchildren Jeff Ferguson (Nancy), Brad Ferguson (Sue), and Laura Acton; grandkids, Steven Acton, Jana Ferguson, Andrew Acton, Brenton Ferguson, Kyle Ferguson, Zach Acton; and great-granddaughter Kendall Acton. She is also survived by her siblings, Judy Tade, Marilyn Wheeler, and Alan Wheeler (Kathy); nieces, Jennifer Brinda (Carlton), Kristen Harris (Mark), Megan Rishmany (Brad); nephew, Todd Wheeler (Meagan); grand-nieces, Ella Rishmany, Avery Brinda, and Samantha Wheeler; and grand-nephews, Jack Rishmany, Gavin Brinda, and Kai Wheeler. She is preceded in death by her loving parents Russell and Mildred Wheeler. Beverly, who preferred Bev, grew up in Kirksville, Missouri. She enjoyed what her sister calls a regular small-town family upbringing. The down-to-earth values she learned as a child stayed with her throughout her life. Bev was a beautiful person inside and out, possessing a genuinely kind heart. She never failed to identify at least one positive trait in a person she first met and remarked on it, putting people at ease. Bev possessed an innate drive and fearlessly went after things she desired, such as earning her Doctorate Degree in Education and capturing the heart of her husband, Jim. She has been described as a ‘real’ person, one who never played games, knew her own mind, loved life, laughed often, and had a magnificent smile that accented the sparkle in her lively blue eyes. It was those characteristics, among others, that drew Jim to Bev. They met while she was a Director in the Arizona State Department of Education and he the Department Chair of Psychology at Mesa Community College. During their first meeting, she called Jim into her office, closed the door, not something she ever did, and then gave him her personal phone number. She knew who she wanted to marry and patiently waited for Jim … well, until she marched into his office one day and boldly asked, “Do I have a chance?” After thirty-three years of happy marriage, the answer to that question was a resounding “Yes.” Beverly embraced the role of mother to Jeff, Brad, and Laura, and grandmother to their children, loving them as if they were her own. She said it best in her wedding vows, “Your family is my family, and my family is your family.” Grandma Bev was known for her bedtime back rubs, and straightforward, sage advice when asked. She also had a unique aura … a calm gentleness that drew people to her, especially her great-granddaughter. A vibrant woman, who adored the color red, she treasured her entire family. In the 1960s, Bev lived with her sister Judy while both were going to college to obtain their Bachelor’s degrees. Later, while teaching accounting in Ferguson, MO, Bev shared an apartment with her sister Marilyn. Being ten years older than her brother, Bev was out of the house by the time Alan was a teen, but that didn’t stop her from interacting with him. Alan recalls being a sixteen-year-old boy without a car … big sister to the rescue. Bev allowed him to use her vehicle on Friday nights for two years, with the only stipulation that he return it with a full tank of gas. Both Jeff’s and Laura’s earliest memories of Bev were when she took the time to teach both how to set up business accounts and keep the books properly. One of Brad’s fondest memories is Bev helping him proofread his Master’s thesis. He handed her his printout and received it back marked up with tons of red. Grateful for her assistance but bemoaning the fact he faced days of retyping, Brad perked up when Bev, an accomplished stenographer and typist, offered to make the edits for him—handing him a clean, error-free copy the very next day. Granddaughter Jana warmly recalls her summer visits and the early mornings she spent playing double solitaire with Bev. A lady possessing many talents, Bev was a remarkable seamstress. She enjoyed making her own clothing—everything from fun tops and shorts to her professional wardrobe. After retiring, Bev continued to use her sewing skills to benefit others. She spent countless hours cheerfully crafting dresses, outfits, and cute vests to donate to children in need. Bev also volunteered at the Mesa library … mixing her love of reading with her desire to contribute to the community. Sadly, the world is a bit dimmer without Bev’s bright smile, and we all miss the delightful lady who graced our lives with her presence. After they married, Jim wrote an acrostic poem for Beverly, which succinctly describes Bev. Beautiful Exciting Vivacious Energetic Real Loving Youthful A viewing and celebration of life will be held from 4:00-6:00 pm on Wednesday, September 1, 2021, at Meldrum Mortuary, 52 N MacDonald, Mesa, AZ 85201.

The family of Beverly "Bev" Anne Ferguson created this Life Tributes page to make it easy to share your memories.

Send flowers to the Ferguson family.