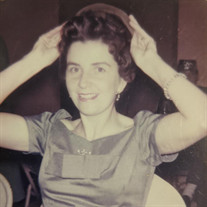 Catherine Elizabeth Baird Neil, “Bette”, of Phoenix, Arizona, entered the Paradise of our Lord on Friday, June 18, 2021 at the age of 88 years. She joins again her husband of 61 years, Alexander McLean Paton “Scotty” Neil, who completed this mortal existence 3½ years ago on December 28, 2017. They are survived by their 3 children, 15 of 16 grandchildren, and 21 of 22 great grandchildren … and counting! Bette was born in Hamilton, Lanarkshire, Scotland on July 21, 1932 to Janet Thomson Davidson and Thomas Baird (or Larney), the youngest of six children. She first attended St. John’s School and excelled all the years of her academic studies. While still in high school, she received certifications in bookkeeping and began work as a comptometer (a very fancy mechanical calculator) operator. After high school, she began work at Dalzell Steel Works in nearby Motherwell where a handsome kiln and chimney bricklayer was very attracted to this pretty office girl. Alex and Bette were married on December 12, 1956 in Whitehill Church in Hamilton. Seeking more opportunity, they emigrated to America and landed in Ames, Iowa in 1957 where Steven and Alexis were born. Life in America was very rewarding, and in 1960, the adventure brought the growing family of 4 traveling across Route 66 to Phoenix where Scott was born. Bette found plenty of opportunities to apply her bookkeeping skills in the family masonry and then general contracting business. She finished her career as an accounts payable specialist for the Paradise Valley School District in Phoenix where she was very appreciated and made many friends. She and Alex joined the Church of Jesus Christ of Latter-day Saints in 1963 and were very involved in the rapid growth of the church in the Paradise Valley area of Phoenix. She served for decades in the youth organizations of the church in both leadership and teaching positions, especially enjoying her years working with the Blazer Scout boys. Later, she served as a leader of the Relief Society women’s organization for the several congregations of the Paradise Valley Stake. Her two sons served missions in Spain, Colombia, and the West Indies. Grandsons have served missions in New York City, Malaysia and Singapore, Ukraine, Taiwan, New York state, and British Columbia. Bette was an avid genealogist and expended great effort over many decades to find the original records for hundreds of ancestors, traveling to Scotland and Ireland and visiting churches, cemeteries and record houses. She contributed this documentation to the church’s electronic databases and then heard from distant relatives all over the world who were also seeking to know and honor their dead. Young Catherine experienced quite a few challenges in her early years. Her sister Jean died at the age of 20 when Bette was only 7 years old. Eight years later, her mother died at the age of 57. Her father died when she was 21. We descendants very much look forward to our reunion with these fine and eternal spirits whom we’ve never met who raised such a quality person. Funeral services will be held on Friday, June 25, 2021 at 10 am at the LDS meetinghouse at 4242 E. Waltann Lane in Phoenix, visitation before from 9 am to 9:45. For those who wish to participate remotely, the service will be available at bit.do/bettefuneral via the Zoom platform. Interment will be at the City of Mesa Cemetery in the northeast section immediately after the service. Meldrum Mortuary is handling the arrangements and can receive any flowers or notes at 52 N. Macdonald in Mesa, Arizona.

The family of Bette (Catherine Elizabeth Baird) Neil created this Life Tributes page to make it easy to share your memories.

Send flowers to the Neil family.