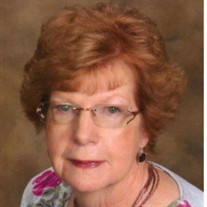 Barbara Lee Steadman passed away unexpectedly on February 1, 2021 at Banner Baywood Medical Center in Mesa, Arizona. She was 83. Barbara was born on March 30, 1937 to Ferd and June Tucker. She was raised in Victor, Montana and graduated from Victor High School in 1955 as class salutatorian. She married soon after to Richard Howell. They raised their four children Brant, Renee, Richele and Denise until Richard passed away in 1966. Barbara moved to Idaho in the late 1960s where she married Wayne Clifford. They were married for 30 years. The family spent many summers camping in Glacier National Park in Montana and the Sawtooth Mountains in Idaho among other beautiful locations. Barbara worked as an executive secretary. She was respected for her work ethic and expertise and formed close friendships with colleagues and neighbors throughout her life. In the 1990s, she and Wayne moved to Arizona to be closer to her mother. She worked for America West Airlines and again found herself respected and loved by all her colleagues. While with the airline, she was a recipient of employee recognition and awards for her service several times. She retired from the airline in 2007. She loved to travel the world and visited many countries, including Ireland, Italy, Egypt, and China. She was always excited about a new travel adventure, even in her final days. She was also an avid bridge player throughout her life. She learned to play golf in Idaho but, when she moved to Arizona, she played more frequently and really enjoyed Arizona’s beautiful weather and golf courses. Wayne passed away in 2000 from congestive heart failure. A few years later, she met Robert Steadman in her community, and they married a year after having met. They too enjoyed golf and travel together. Bob passed away in 2011. She married Bill Kenyon in 2014. Barbara was known to everyone who met and knew her as a charming, lovely, vivacious woman. She was a loving mother and wife, and a loyal friend. She had a contagious laugh and loved to have fun. She is preceded in death by spouse Wayne Clifford in 2000, and later Robert Steadman in 2011, daughter Renee Howell, mother June Scheffer, and father Ferd Tucker. She is survived by her brother Clyde Tucker, daughters Richele Howell and Denise Howell of the San Francisco Bay Area, and son Brant Howell of the Seattle area. Surviving children in her extended family are Marvin Clifford of New Orleans, Robert Clifford of Santa Fe, and daughter Jaylene Worrell of Dillon, Montana. Her cousin, Arlene Kamura, is in Missoula, Montana. She has 4 grandchildren in her immediate family and 8 grandchildren from her extended family. Barbara will be interred at Queen of Heaven Cemetery in Mesa, Arizona next to her husband, Wayne Clifford. Services will not be held at this time due to health and safety concerns of the COVID-19 pandemic. The family will determine a memorial service for their beloved Barbara when all can attend safely.

Barbara Lee Steadman passed away unexpectedly on February 1, 2021 at Banner Baywood Medical Center in Mesa, Arizona. She was 83. Barbara was born on March 30, 1937 to Ferd and June Tucker. She was raised in Victor, Montana and graduated... View Obituary & Service Information

The family of Barbara Lee Steadman created this Life Tributes page to make it easy to share your memories.

Send flowers to the Steadman family.