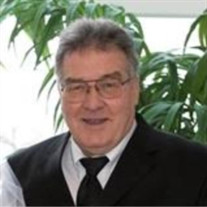 ARVIN CLARK CRAWFORD 1936-2022 ARVIN CLARK CRAWFORD, a husband, brother, father, grandfather, great grandfather, uncle, and friend. He will always be remembered by his children and grandchildren for his sharp mind, humor, and ability to tell stories making us laugh, even though we'd heard them many times before. His grandchildren have happy memories of celebrating summers with him in the cabin he built on the river in Ione Washington, and at the home he built in Blackfoot Idaho. Arvin was known locally for his annual neighborhood 4th of July BBQ and fireworks show. Arvin was 85 years old when he died on March 4th in Gilbert, Arizona. Arvin was born November 21, 1936, to Clifford Edwin Crawford and Grace Ana Clark in Blackfoot, Idaho. His early years were spent on a ranch, where he attended public schools in Blackfoot, Idaho; and graduated from Cheney High School in Cheney, Washington. Arvin went on to get a bachelor’s degree from Brigham Young University. Arvin was an educator for forty years, in roles that included principal, teacher, counselor, coach for football, wrestling and baseball, referee, driver training, in Washington, California, and New York. Other jobs included ranching, mining (lead, zinc, and silver), dairy, plywood mill, steel mill, forest service, construction, and tax preparation. Arvin married Dorothy Ann Lee on August 14th, 1956 in Spokane, Washington, later divorced. They had six daughters, who were his cheerleaders when his teams played. In his later years, Arvin spent winters in the Mesa Arizona area where he enjoyed time with his parents, sisters, and where he met his wife Joan. Arvin married Joan Jolley on June 21st, 2008 in Gilbert Arizona. Arvin was an active member of The Church of Jesus Christ of Latter-Day Saints and served in various callings. Arvin and Joan served a mission for The Church of Jesus Christ of Latter-Day Saints in the Australia New South Wales mission, where they made lifelong friends and will forever feel a kinship to the people and beautiful country. His interests included athletics, hunting and fishing, traveling, and in recent years family history. Arvin also got his pilot's license in New York, flying several daughters and friends around the Statue of Liberty. Arvin was proceded in death by his parents Clifford and Grace Crawford, sisters Carol Gilbert and Ana Hall, and a great granddaughter Jane Marie Perkins. Survived by his wife, Joan Crawford, a sister Janice (Thatcher) Shaw, children: Debra Crawford; Brenda (Jarakae) Jensen; Leesa (Kurt) Leishman; Danette (Glenn) Schwarz; Karene (Dave) Stevens; and Allyson (Stephen) Markham; thirty grandchildren, and 51, shortly 52, great grandchildren; stepchildren: Kristi (Lloyd) Radnall, Jill Strickland, Nikki (Nathan) Hull, Marissa (Dennis) Haushalter, and Brad (Rosy) Millett, twenty grandchildren and 26 great grandchildren. There will be a viewing for family and friends at Meldrum Mortuary in Mesa, Arizona on Thursday March 10th from 6:00 - 8:00. And a viewing for friends and family at Hawker Funeral Home in Blackfoot, Idaho on Friday, March 18th from 6:00-8:00. Services will be held at the Blackfoot 12th Ward Chapel at 1289 Mt Putnam Drive, in Blackfoot Idaho on Saturday, March 19th at 11:00, and then to a graveside dedication at Grove City Cemetery and lunch back at the chapel.

The family of Arvin Clark Crawford created this Life Tributes page to make it easy to share your memories.

Send flowers to the Crawford family.