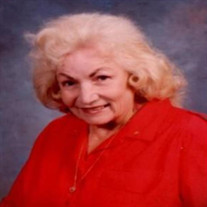 Ardella Fay Hancock, was born October 8, 1929, in St. David, Arizona, 5 days before the Great Depression, to Jacob Truman Hancock and Ardella Eldredge. She was the first daughter following three boys. Her family would eventually grow to be four boys and four girls. Her mother later recorded in her diary, “I finally had a darling girl. We named her Ardella Fay, we called her Fay. She has always been a very dependable hard-working girl, helping so many people besides her family. She has certainly been a great help to me.” In 1936, at the age of seven, her family moved to Mesa, Arizona where Fay remained the rest of her life. She attended Alma School, graduating 8th grade then attended Mesa High or “Old Union” as it was called. She was very active in sports, playing both softball and basketball. She was a Rabbett during her sophomore, junior and senior years. During her senior year of high school when she saw the most attractive Sailor just home from the war. “My heart was lost to him.” His name was Norman Arrington whom she married in February of her Senior year. Promising her father that she would finish high school she received special permission from Principal Harvey Taylor, as married women in high school was an exception in those days. Much to her father’s pleasure she graduated in 1947. To this union were born five children: Blinda Fay (1948), Darrell and Dorrel (twins 1949), Darla (1952) and Duke (1954). She was also blessed with two stepchildren, Frank and Beverly Burgwin. Three of her children Darrel, Dorrel and Darla, were born severely handicapped. From the moment of their birth, Fay, became a Mother with a mission. She was a founding member of Friends and Family of Arizona Training Center. A group whose purpose is to ensure that all handicapped children received the dignity, respect and medical support needed to ensure the best quality of life possible. She traveled every Sunday (a 100-mile round trip) to attend Primary with her children and all their special friends. She was a Mother to everyone there and fought fiercely for their rights before the Arizona Legislature to ensure they could live in comfort and peace for the remainder of their days. Fay passed away Thursday, April 29, 2021, at home surrounded by her loved ones. She was preceded in death by her Father, Mother, brother Glenn (at age 3), brother Eddie, son Dorrel, stepdaughter Beverly and the love of her life, Norman. She leaves behind two brothers: Lloyd and Bruce, three sisters: Gertrude, Janet and Joann, five children: Blinda Arrington-Mills, Darrel, Darla, Duke (Dawn) Arrington and stepson, Frank Burgwin. Ten Grandchildren, thirteen great-grandchildren, twelve great-great-grandchildren and many nieces and nephews who dearly loved their Aunt Fay. She will be greatly missed but has left her family a legacy of genealogy and memorabilia that will truly be treasured for generations to come. Funeral services for “Granny” Fay will be held Tuesday, May 4, 2021 at the Heritage Park Ward located at 235 W 10th Ave. Mesa, AZ 85210. The viewing will begin at 9:00 a.m. with services to follow. Internment following at City of Mesa Cemetery located at 1212 N. Center St. Mesa, AZ 85201.

Ardella Fay Hancock, was born October 8, 1929, in St. David, Arizona, 5 days before the Great Depression, to Jacob Truman Hancock and Ardella Eldredge. She was the first daughter following three boys. Her family would eventually grow to be four... View Obituary & Service Information

The family of Ardella Fay Hancock Arrington created this Life Tributes page to make it easy to share your memories.