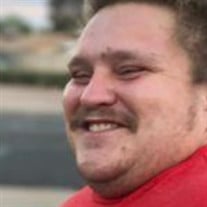 Anthony Joseph Simon Gerger, 29, of Mesa, passed in his sleep on Saturday, January 1st, 2022, at his home. He was born on February, 5, 1992, to Victoria Bolkan, of Mesa, and the late David Gerger (& Bobbie), of Kenosha. Anthony had many nicknames including, AJ, Gramps, Mouth, Peanut, King, Felicia, Sheriff, but everyone who knew him knew of his kind hearted and loving nature. He held many positions in many people's lives and he changed every single one of them in several ways. AJ worked at Jimmy Johns for over 10+ years where he met and befriended so many of the employees and forever changed their lives along with his own. AJ changed so many lives with his positive, funny, and outgoing personality and a laugh that can never be forgotten. He was an avid partier and loved having a great time with friends, he loved billiards and darts, and was always down for a poppin party. He had a flare for the dramatics but it would not be AJ if it were not dramatic. He had a good relationship with every walk of life and knew how to cheer people up. Even on his darkest of days, he was the light in so many tunnels. AJ is survived by numerous family, including his mother, Vicki (& Lonny) of Mesa, his brother Nick (& Mariah) of Neenah, and his two sisters, Jessica, and Jenna of Mesa. His aunts Karin (& Joe) of Missouri, and Leann (& Don) of Kenosha, and Cousins Philip of Kenosha, Kelsey (& Jay) of Glen Flora, and Amanda (& Caleb) of Milwaukee, and several other family members. A countless number of friends including, but never limited to, Benny Boy Paul (& Hazel, WI), Joe Prado (WI), Toney Robinson (AZ), Robert De Pernia (AZ), Hector Mejia (AZ), the late PJ (AZ), Paula Nelson (AZ), Rafael Berrios (AZ), CJ Reddick (Ringo, WI) Andy Kroll (AZ), Jordan Clark (GA), Michael Piork (AZ), Haylee Beaudry (AZ), Danielle Griffin (AZ & WI), Jeremy Copland (AZ & WI), Dani Mac (AZ), Yvette Cardinale (WI), Julian Alexander (AZ), Summer Lee (WI) and a whole horde of others who were in and out of his life and who would stand up for AJ no matter the situation and whose lives he’s changed in so many ways. Gone too soon, but will never be forgotten in so many lives. A viewing service will be held on January, 11, 2022 from 6pm-8pm at Meldrum Mortuary and Crematory in Mesa at 52 N Macdonald, Mesa, 85201. Our family would like to thank all of AJ’s friends for having such a huge impact on his life, you guys were the world to him. He loves every single last one of you and nothing will ever change that.

Anthony Joseph Simon Gerger, 29, of Mesa, passed in his sleep on Saturday, January 1st, 2022, at his home. He was born on February, 5, 1992, to Victoria Bolkan, of Mesa, and the late David Gerger (& Bobbie), of Kenosha. Anthony had many nicknames... View Obituary & Service Information

The family of Anthony Joseph Simon Gerger created this Life Tributes page to make it easy to share your memories.

Anthony Joseph Simon Gerger, 29, of Mesa, passed in his sleep...

Send flowers to the Gerger family.