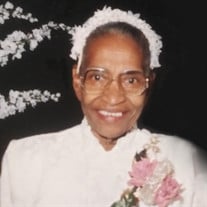 Not sure what to send?

Anna Lee “Ankie” Washington was born August 22nd, 1922, to the late Sylvanus and Arlena Myers in Crockett, Texas. She was the third oldest of 11 children and began her education at Willow Spring and Salt Branch Elementary Schools. She gave her life to Christ at the early age of 13 and she has never faltered or lost faith in her Lord and Savior. In 1940, with new job opportunities working the Arizonian cotton fields, her entire family packed up and relocated to Marana and Eloy before settling in Mesa. She caught the eye of Thomas “Tommie” Clarence, who happened to be friends with her brother Joe. On October 11th, 1943, Ankie and Tommie were married and together had five children: Erma Jean, Virginia, Loretta Ann, Sylvanus Thomas, and Debra Rochelle. Ankie and Tommie lived in Higley, AZ, and worked on the Ellsworth Ranch, where he was a foreman, and she was a homemaker, occasionally working in the fields. Ankie also worked as a housekeeper for the Gore, Phelps, and Ellsworth families. While living in Higley, Ankie and Tommie purchased a house on Lewis Street in Mesa. Ankie was a member at Grace Memorial Church of God In Christ located in Chandler, AZ. She was the Superintendent of Sunday School, Young People Willing Workers, and the Usher Board under the leadership of Elder McGriff and Elder Thompson. She was a wonderfully talented cook and seamstress. She enjoyed creating her own recipes and was famous for her Sunday Dinners which included sweet potato pies, peach cobbler, white coconut cake, chicken, and roast beef. Moreover, she loved creating designs for quilts, tablecloths, bedding, and clothing, each with intricate embroidery. She loved spending time in her flower garden. For two generations, when her lovely bouquet were entered in a flower contest, she would win a blue ribbon hands down! When her beloved Tommie passed away in January of 1974, the family moved to Lewis St in Mesa, AZ. She became a member at Holy Temple Church of God in Christ under the leadership of Elder Donny Boyd. She later became a certified home daycare provider and one of the “Village Babysitters.” If you lived anywhere in Mesa, your child/-ren were under the watchful eye of Willie Mae Myers, Dee Dee Quick, or Ankie Washington. Ankie had a heart of gold and opened her doors to family and friends. On May 8th, 2022, at 9:15 pm, she was called back home to be with her Father in Heaven. She is preceded in death by her father, Sylvanus Myers, her mother, Arlena Myers, and her daughter, Virginia Washington. Her five brothers, Ruel Joe Myers, Emanuel Myers, John Ivory Myers, George Ellis Myers, and Norman Myers. Three sisters, Willie Mae Myers, Helen Creozetta Hinton, and Geneva Rhodes. Anna leaves to cherish her memories: three daughters, Erma Washington of Mesa, AZ, Loretta Cardin and Debra Washington of Phoenix, AZ; One son Sylvanus Washington and wife, Sally, of Ball, LA. Eight grandchildren, 40 great-grandchildren, and 19 great-great-grandchildren. Two sisters, Arvesta “Vee” Hodge and Barbara Campbell, as well as a host of nieces, nephews, and friends.

Anna Lee &#8220;Ankie&#8221; Washington was born August 22nd, 1922, to the late Sylvanus and Arlena Myers in Crockett, Texas. She was the third oldest of 11 children and began her education at Willow Spring and Salt Branch Elementary Schools.... View Obituary & Service Information

The family of Anna Lee Washington created this Life Tributes page to make it easy to share your memories.

Send flowers to the Washington family.