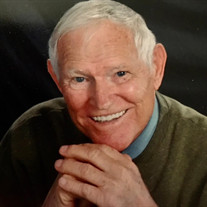 Alvie (Al) Thomas, a proud third generation Arizonan was born at home on July 24th 1933 in Phoenix to Nadene Moss Thomas and James (Tommy) Thomas, their first born. When his mom mentioned his birth she said he was born in a dust storm. He always replied, “during mom, during.” Three siblings were born during the next three years: Frances Langley, deceased, and William Thomas, deceased. He is survived by his wife Mary, his brother Bob, his children: Laura, Mark, Debby (daughter-in-law), granddaughter Ellie Thomas, as well as two nephews, James Strickland, Randy Thomas, and a niece Vicki Winkler. Al graduated from Phoenix Union High School in 1952. Two days later he enlisted in the Army to see Germany. Instead, he was sent to Korea during the Korean Conflict where he earned the rank of Master Sergeant. He was awarded two Bronze Stars.The last 18 months of his service were spent in Yuma. He attended Arizona State University on the GI Bill, which he was grateful for. While earning his Masters, he met Mary Hines, who later became his wife of 57 years. He began teaching in 1962, majoring in education. He spent his first two years teaching at Mesa Junior High School. After that he went to Westwood High School as part of the staff to help open its first year. He taught American history, Arizona history, and government. He also coached many sports including American legion baseball, football, girls softball, and track. However, his first love was American history. He retired from Westwood in 1995 and continued to substitute for ten more years. During his tenure his two children were born. He loved to take the family to the Grand Canyon Disneyland and Oregon. He also took them on several fishing trips including Oak Creek Canyon, Woods Canyon Lake and the White Mountains. His circle of friends were legion. They included the Hole in the Wall Gang, his many Theta Chi brothers, the Greer group, his Desert Heritage Church family, his neighbors, and former students. The circle also includes his family, as well as his travel companions. Although Christmas was Al’s favorite holiday, his family is grateful that he was able to enjoy his last Thanksgiving at home with them. His wife Mary, children Laura and Mark, his daughter-in-law Deb, his granddaughter Ellie (the light of his life) and his dog Lucky Maizy, will miss him. In lieu of flowers, please make donations to Stealing Hearts Rescue at 4008 W Camino Del Rio, Glendale, AZ 85310 602-686-4156 https://www.stealingheartsrescue.com A Celebration of Life will be Monday, December 20th, 2021 at Desert Heritage Church, 1020 N Horne, Mesa, AZ 85203. A visitation with the family is at 10:00 A.M. Services at 11:00 A.M. will also be streaming online at /www.dhcmesa.com/live-st At 1:00 P.M. there will be a short service at National Memorial Cemetery, 23029 N Cave Creek Rd, Phoenix 85024

Alvie (Al) Thomas, a proud third generation Arizonan was born at home on July 24th 1933 in Phoenix to Nadene Moss Thomas and James (Tommy) Thomas, their first born. When his mom mentioned his birth she said he was born in a dust storm. He always... View Obituary & Service Information

The family of Alvie (Al) Newton Thomas created this Life Tributes page to make it easy to share your memories.

Send flowers to the Thomas family.