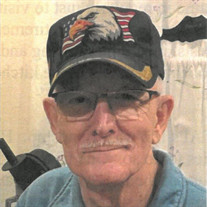 In Loving Memory of ALTON MONROE CARTER Alton M. Carter, known to most as Al, died December 19th, 2020 at the age of 79, at Banner Desert Medical Center in Mesa, AZ. He is survived by his wife of 54 years, Barbara, brother Harold, son Jonathan (Sue), daughter Amy (Ron), and two grandsons, Ethan and Seth, as well as his beloved dog, Mandy. Al was born in Corry, Pennsylvania in 1941, but his family moved to Arizona when he was a young child. From the beautiful Sonoran desert to the cool pines of the Mogollon Rim, Al loved Arizona and always considered it “Home.” Proudly serving in the US Army, Al was stationed in Germany for two years, where he met his wife, Barbara. He carried fond memories of the friends he made and the experiences he had while overseas, and would eagerly share his humorous stories with all who would listen! Hard work was a cornerstone of Al’s life, beginning with his first job making Hoola Hoops at age 14, to help support his family. From the age of 16, Al began working in restaurants, doing everything from busboy, to cook, to waiter. His strong work ethic eventually led him to years of restaurant management. Important to Al were the many young people who were hired by him for their first job; these youths often returned over the years to thank him for his influence on their lives. Al became well-known to local residents at Bill Johnson’s Big Apple where he managed the Mesa location for over two decades, until his retirement in 2001. Many of Al’s customers came in regularly just to visit with him, including winter visitors who returned year after year. In his retirement, Al remained active, pursuing a variety of interests, including drawing and painting, as well as gardening. But he was probably happiest in the kitchen, cooking for family and friends…anyone, any time. The overarching theme of Al’s life was friendship. He loved to make others laugh, and looked for opportunities to do so. One friend of 59 years, Don Kalfas, recounted a favorite memory of their crew meeting at a coffee shop after work just to tell jokes. He shared that together they “drove a million miles, and laughed a million laughs.” A friend to everyone, Al epitomized the quote by Will Rogers: “A stranger is just a friend I haven’t met yet.” This made him a natural as a greeter at church, welcoming newcomers and friends as they arrived. Al brought joy to all who were fortunate to know him. He will be remembered for his kindness, his “punny” sense of humor, and his work ethic, all of which were an inspiration to so many. He was well loved, and he loved well…and will forever be missed. ~~~~~~~~~~ Private services were held Monday, December 28th, 2020 at National Cemetery of Arizona. A joyful celebration of Al’s life will be held on April 10, 2021 at 11:00 AM at Without Walls Church in Mesa, Arizona. Details and time will be posted on this website in the near future. In lieu of flowers, the family asks that donations be made to Patriot Paws. "The mission of Patriot PAWS is to train and provide service dogs of the highest quality at no cost to disabled American veterans and others with mobile disabilities in order to help restore their physical and emotional independence." Patriot PAWS Service Dogs 254 Ranch Trail Rockwall, TX 75032 To learn more: https://patriotpaws.org The link to donate is: https://patriotpaws.org/donate/

In Loving Memory of ALTON MONROE CARTER Alton M. Carter, known to most as Al, died December 19th, 2020 at the age of 79, at Banner Desert Medical Center in Mesa, AZ. He is survived by his wife of 54 years, Barbara, brother Harold, son Jonathan... View Obituary & Service Information

The family of Alton Monroe Carter created this Life Tributes page to make it easy to share your memories.

Send flowers to the Carter family.